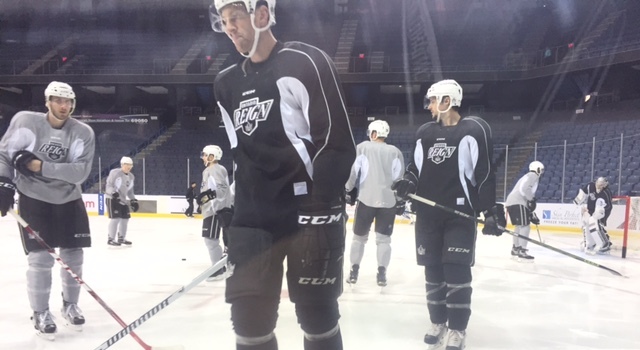 Some notes from today’s morning skate on Veterans Day at Citizens Business Bank Arena. The Reign take on the San Jose Barracuda at 7 p.m.

–All rostered players were on the ice with the exception of Kris Newbury (broken foot) and there’s no reason to expect any major lineup changes. Forwards Kenton Miller and Derek Arnold were sent back down to the ECHL earlier this week which means Jordan Samuels-Thomas, who scored a hat trick in Saturday’s 4-0 win over Stockton, is here to stay, at least for now. “He’s made himself a mark and so long as he keeps playing the way he is and so long as he doesn’t get comfortable, he’s a good guy to have around,” head coach Mike Stothers said after practice. The Reign are nearing a healthy roster, but Joel Lowry is still a bit of a question mark and won’t make his debut tonight. “We only have one extra forward right now and that’s Lows and he’s not quite ready yet to even play tonight, so we’re one injury away from either moving a defenseman up or shortening the bench up front and playing seven D on the backend,” Stothers said.

–The Reign have reached the 10-game mark this season, boasted a 7-1-2-0 record. They’re tied atop the Pacific Division standings and their one regulation loss this season came against the Barracuda back on Nov. 1. “We’re plugging along in a very difficult division in what appears to be a lot of good opponents,” Stothers said. “Tonight’s no exception. We’ve split the early-season series 1-1 and we’re realizing that it’s hard to get points and you really need to because everything’s based on the winning percentage going into the playoffs. If you can take a positive out of it the 10 games we have played we’ve gotten points in all of them except for one, so hopefully we can continue at that pace and keep it in our mindset that every game’s a big one.”

–Goalie Peter Budaj was first off the ice and will get the start again tonight. The NHL veteran leads the league in wins (7), GAA (1.31), sv % (.947) and SO (4). But another Reign goalie is nearing his return in Patrik Bartosak (thumb), who has been a full participant in practice this week for the first time this season. “The thumb’s feeling better and better every day. I can see progress with the range of motion and everything. With the brace underneath my glove I feel really good and really solid in net,” said Bartosak, who had surgery on his catching thumb in early October. “I just can’t wait to get out there and play a game,” Bartosak said. “I don’t know when that’s going to be, I hope as soon as possible but I’m definitely excited to get back at it. … I’m just going to keep working hard every day and get the conditioning back and get the little details going and once the coaches think I’m ready to go I’ll be ready to go.” That time could be as early as next week, at least according to Stothers. “For now he’s on pace or on course for probably Saturday we will have him available to us as a backup and then from there we’ve got the remainder of this week and next week before we go to Texas,” Stothers said. “So long as there’s no setbacks he’ll probably get his first action next week.”