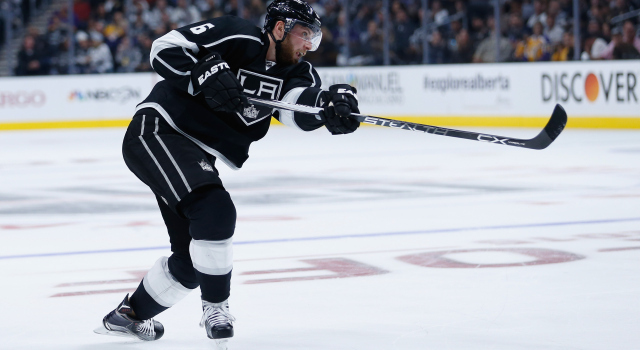 From a very basic assessment, the Kings’ power play has been successful thus far this season. They’re operating at 20%, which is very good. After ranking 10th with a 19.0% rate last year, they’re currently ranked 11th in the league entering tonight’s game against the Arizona Coyotes, courtesy of an 8-for-24 stretch in which they’ve scored power play goals in seven of their last nine games.

“I think the D have been doing a good job to get shots through, getting movement up top, and what we’re doing better is getting screens and tips in front, and that’s what makes a successful power play,” said Drew Doughty, who notched his first goal of the season during a power play in Saturday’s win over Florida.

“It’s not about moving it around all nice and pretty, it’s about getting shots and pucks to the net and bodies in front.”

He’s right about the shots and pucks part, and the Kings have done an exceptional job of that this season. Los Angeles has taken 69.6 shots on goal per 60 minutes while on the man advantage. Not only is that the best PPSOG/60 rate in the league, no other difference is as great as the divide between the Kings at #1, and the Blue Jackets at #2 (60.8 PPSOG/60).

Of course, shots on goal don’t equate to goals. Los Angeles’ power play shooting percentage ranks 20th at 8.0%, a full five percentage points below last year’s 13.0% rate. But because the Kings also have a minus-seven penalty differential that ranks 24th in the league, an argument could be made that they’re capable of rising up from the respectable success they’ve already generated should they begin to draw more penalties, generating even more shots on goal.

“Being top-five in the league would be our ultimate goal,” Doughty said. “Obviously the ultimate goal would be one, but we want to keep getting better at it, because power plays nowadays, they’re so important to winning hockey games. If you can get some momentum off the power play or a goal, it’s a big change in the game. We know that as guys on the power play, and we know that we need to be successful when we’re out there.”

Alec Martinez, on the power play’s success:
I think we’ve had a lot more movement than we did maybe the first few games when we weren’t that successful. Sometimes when our power play isn’t producing we get a little bit too stagnant, so I think when we’re constantly moving and interchanging as D pairings, but then also with Kopi moving up and down the wall, Carts looking for shots – I could keep going on and on – I think that’s been part of our reason for success as of late, and then just getting shots through. Often time those shots shot lanes are created by movement. You look at Dewey’s goal the other night, there was a lot of movement on that right side, and then Muzz gets that play and is able to slide it over to Dewey, and Dewey’s got a wide open lane to the net. Between getting shots to the net and just moving is probably the biggest difference.

Recommended by @anexanhume at JFTC: LA’s Power Play is Off to a Promising Start