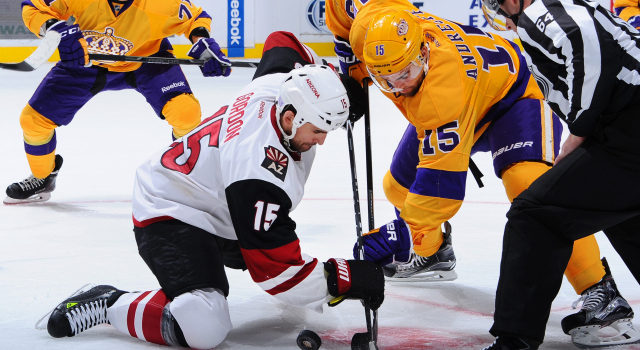 On what Milan Lucic is doing well on Jeff Carter’s line:
I think it’s probably more Jeff and Tyler than it was Kopi and Gabby. I think Jeff’s got more speed in the middle of the ice in his game so far this year than Kopi would have, and obviously Tyler’s got 10 goals now after tonight, so big difference. [Reporter: What’s he contributing on that line?] He’s a physical presence. He brings some energy and emotion to the game.

On whether it was good to see Dustin Brown score:
Hopefully he remembers how he did it. He’s got to play a power game. I’m not sure that was a part of his game tonight. The goal didn’t mean anything at the end.

On losing twice to Arizona:
Yeah, it’s disappointing. A division team, and we’ve had some guys who haven’t played very well against Phoenix for a long time, not just one or two games.

On the offensive chances:
I think there was a lot around the net, and there were some whistles after three or four piles or scrums there, but for the most part, we didn’t get around there enough.