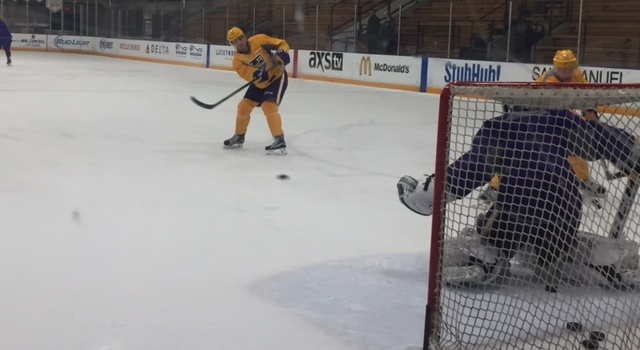 The Kings have wrapped up their morning skate in advance of their game tonight against the Arizona Coyotes (7:30 p.m. / FOX Sports West / KABC 790 / I Heart Radio), the third game of their five-game home stand that will continue on Thursday against the New York Islanders and conclude on Saturday against the Edmonton Oilers.

-Jonathan Quick left the ice first and is expected to start against Arizona. Jordan Weal and Matt Greene remained on for extra work (Christian Ehrhoff and Jhonas Enroth came off the ice a touch earlier) and none will be projected to play in tonight’s game. Greene (upper-body) remains on injured reserve.

-The Kings are wearing their gold jerseys tonight as part of the Legends Night series, which will honor Foster Hewitt Memorial Award recipient Nick Nickson. Though future Legends Nights this season will honor Jimmy Carson and Mike Donnelly, tonight will be the only home game in which Los Angeles will sport Forum Blue and Gold. More on that to come.

Antoine Vermette is going for a skate at the moment but sounds as positive as I've heard through this nagging injury: "I'm a maybe tonight."