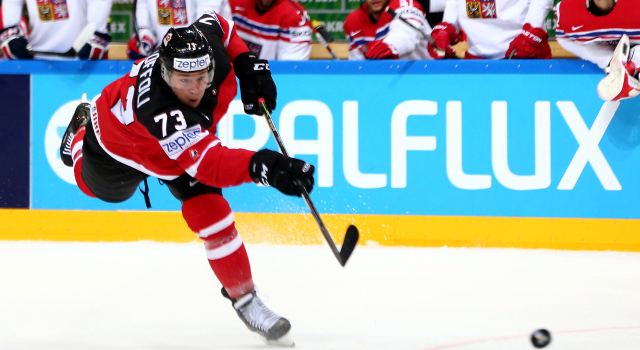 Though Lombardi media sessions are always interesting, the most revealing Kings-specific news came when Armstrong listed several familiar names as those who could occupy peripheral spots on Canada’s roster.

“What’s great about this, scouting this and going through this is that there’s players that are having really good seasons that weren’t on that radar screen that we’re really going to hone in on,” Armstrong said during today’s media availability. “A couple examples are Toffoli in Los Angeles is playing very well, Muzzin in Los Angeles is playing very well, Stone in Ottawa is a very good player, Gallagher in Montreal. That’s just to name a few of the guys that are getting our attention, and now what we’re going to do as a group is really hone in on that list of 14 or 15 guys that are going to make the final part of our roster and really get a chance to watch these guys.”

Obviously players like Sidney Crosby and Jonathan Toews would represent Canada should they be healthy. Armstrong said that there were “at least” 11 players who occupied a spot on every list submitted by Canada’s World Cup staff.

“The really hard decision for Hockey Canada, because of the depth of our player pool, is that 17-through-23,” he continued. “What we’re trying to do is also find out where the greatest competition is, and then naming our 16 around that. So if we believe that there’s more competition in forward or a defense spot, maybe we’ll name an extra goalie or an extra forward or an extra defenseman to lead that flexibility into that area of real good competition for the team.”

That Muzzin and Toffoli were named as those being considered for the team is a perk, but both players’ chances of being favored for a roster spot are murky, and Muzzin’s especially so given the existence of Shea Weber, Duncan Keith, Drew Doughty, Alex Pietrangelo and P.K. Subban, amongst others.

But both Muzzin and Toffoli won gold for Canada at the World Championship this past spring, so they’ve already gone a ways towards familiarizing themselves with Hockey Canada. Toffoli had previously represented Canada at the World U-17 Hockey Challenge and the Memorial of Ivan Hlinka Tournament, while Muzzin’s World Championship experience was the first time he had sported a national team jersey.

“It’s awesome, first off, that both of those guys are being mentioned,” said Doughty, whose World Cup jersey may as well have already been made.

“They both went over for the World Championship there, and from what I heard had very good tournaments. I know they like to look for familiarity, especially on the blue line in those types of tournaments. Hopefully it’s not out of the question for me and Muzz to potentially be partners or something like that. I know that’s a long shot away, but you never know what could happen, because me and Muzz, we play good hockey together, obviously. Hopefully they both make it. I don’t know what’ll happen, but hopefully I make it, too.”

Alec Martinez, on whether Arizona offers a new look from seasons past:
They’ve got a little bit of everything. You look at a couple of those young guys, they bring a lot of energy to that team, and they’re skilled guys. And then they’ve got a lot of guys that they’ve had for a while that we’ve been playing against and good veteran leadership, so they’re a good hockey club, and then obviously they have Mike Smith back there, who’s really good in net. They’re just a good hockey club.

Martinez, on Jeff Carter:
Carts is unbelievable. He’s a great veteran presence in the locker room, he’s been around a long time. He’s got a calming presence to him, too. He’s an unbelievable guy. … He’s an unbelievable guy both on and off the ice, and obviously on the ice, he’s got that speed, he’s always available, he’s really smart, he’s good down low at both ends of the ice. He’s always there for us D – real low or slow in the middle there, and he’s got that really deceiving speed, I’d say. All off a sudden, as a D-man, it might not look like he’s moving too quick, and then all of a suddent he’s behind you. I can’t say enough about the guy.