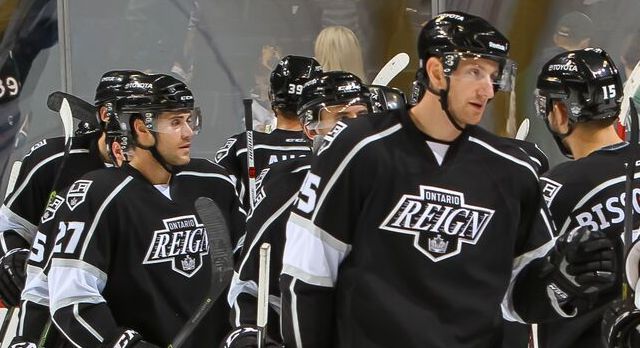 Saturday night following the Reign’s 4-0 win over Stockton, I caught up with head coach Mike Stothers via text on the team bus as they made their way back to Ontario.

Question: I know you’ve spoken highly of Jordan Samuels-Thomas before. How happy were you to see what he did tonight?
Stothers: It was great to see him finally finish and rewarded for his hard work. He plays big on the puck and drives the net well. Prior to tonight he has been getting shots and good chances but they just weren’t (hitting) the back of the net. Tonight everything he touched was Gold. We are all very happy for him.

Question: Overall thoughts on the game. What do you take away from this one?
Stothers: Thought we were very sloppy with the puck. Too many giveaways and turnovers. Took lazy penalties. Didn’t move the puck or our feet. That being said we found a way to win and maybe balances the games I thought we deserved to win vs. San Antonio.

Question: What about Peter Budaj? He’s been tremendous and the defense overall has been great. Does it start with him or is it team D that has things going so well so far this season?
Stothers: Well for the most part it is, and you want it to be a team thing, but tonight it was Budaj for sure. He was excellent. We try to play a responsible team game and I think we have thru the first nine games. We were solid in our end and we gave up fewer shots and fewer chances. Tonight we were out of sync and gave puck away far too frequently. The D and forwards were guilty of it. Budaj was huge for us on a night we needed him most. He has been so composed and give us the save if, and when, there is a breakdown. He was outstanding once again.