Production and checking addressed, a new opportunity for Pearson 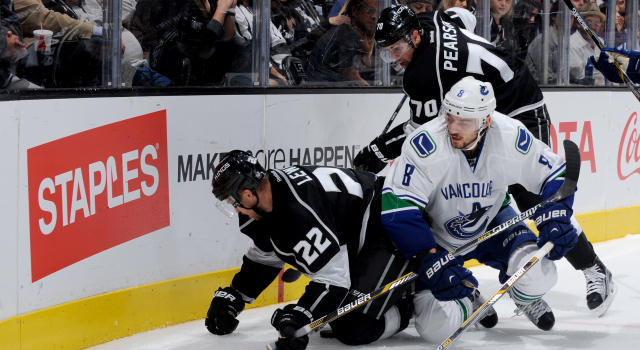 Trevor Lewis is expected skate to the right of Anze Kopitar in five-on-five action for today’s game against Florida Panthers, and that’s not really news because Lewis fills needs up and down the lineup, at left wing, center and right wing, on all four lines, as needed. His versatility, checking and compete regardless of his slotting is a constant.

Tanner Pearson, though, will get a look only two games after Darryl Sutter indicated that there was a chance he’d be a healthy scratch.

“He was a game-time decision in St. Louis, and hopefully that woke him up,” Sutter said after Friday’s practice. According to both Sutter and Pearson, the checking aspect of Pearson’s game needed to be raised.

Responding well to Sutter’s stimuli, Pearson provided an important insurance goal in a gritty win over the Blues as part of a two-point night that set up his opportunity today against Florida. In 13 games, the 23-year-old winger has two goals and five points.

“Yeah, I think that message was clear, especially after what happened in Chicago,” he said, referencing a missed clearing attempt that led to the Blackhawks’ game-winning goal. “You kind of have to look at that and buckle down, so right now I’m just taking it one step at a time and get in there, get in there, and hopefully once the checking comes into play it’s going to start happening.”

The checking aspect will be reinforced when skating alongside Kopitar as he’ll often face the opposition’s top players, and that means lining up at times against a right wing who’s among the strongest players on the puck in the modern history of the game in Jaromir Jagr.

“I think especially over the past two games I think I’ve found my game,” Pearson said. “Checking, I think that’s where my game comes from, getting in there and then being hard and quick and stuff will come from there. I think that’s the starting point. I’ve just got to start there every game and things will come.”

With Pearson and Lewis lining up alongside Kopitar, Marian Gaborik and Dustin Brown, who have combined for one goal on the season, were moved alongside center Nick Shore. Jeff Carter’s line and Andy Andreoff’s line are expected to remain intact against Florida.

“That can change in the first five minutes for the whole game. You just never know,” Pearson said. “You’ve just got to come prepared and play your game and talk to your linemates how you start the game and go from there.”

Tanner Pearson, on whether anything got away from the team against Columbus:
I think the shots over two periods, I didn’t know they only had eight or nine. … I think we were climbing back the whole game, being down 2-1 coming out of the first. I think that’s what our focus is, trying to win the first and go from there. To be down 2-1 and trying to climb back the whole game, we just couldn’t capitalize and they got a third one. We were able to get that second one, but it was too late.