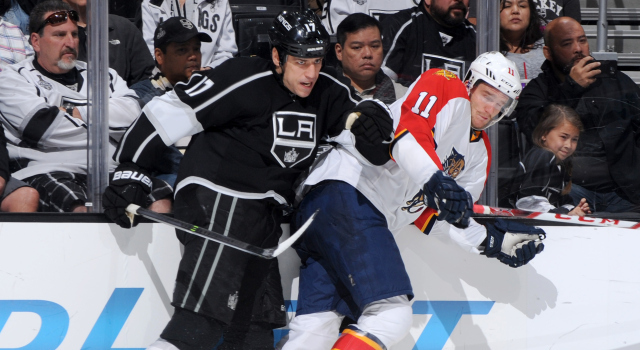 Milan Lucic, on whether the five-on-three penalty kill sparked their game:
I think our game was moving in the right direction. We came out hard in the second period. But you look at the game as a whole, being able to kill that, what was it, minute and 15 [second] five-on-three. I think we only allowed two shots on it. To be able to kill that off, I think was a big emotional momentum changer for us. To come out two or three shifts later and tie it up, 1-1, was probably turning point of the game and it was good to see the killer instinct of the guys to not look back after that, to continue to get the pucks on the net and get some big goals. Obviously the power play steps up again. You talk about special teams, the PK does the job and then the power play does the job and eventually gets the game winner. So it was a great team effort here today and it definitely feels good.

Lucic, on Jeff Carter:
Yeah definitely, he’s playing really, really good. He’s a guy that plays with a lot of speed and you can tell that he’s using it. He’s using it to his advantage and he’s feeling it out there. I think he’s controlling the play and using myself and Toff really well to support him. So it’s great to see him kind of take it over and lead the team in the right direction, turning it around after the 0-3 start. He’s one of those guys that wants to score and wants to be a part of contributing to the team’s success. And that’s what you need out of your big guys and your leaders.

Lucic, on generating more shots than their opponents in recent games:
Yeah, that’s definitely the plan. That’s the game plan heading into every game, is to outshoot your opponent and keep the shots against down as much as you can. Obviously we have one of the best goalies in the league between the pipes and you know he’s got our back. He’s going to battle when he has to make that big save, but we try to make his job as easy as we possibly can by not allowing shots against. And again, the best defense is playing in the O-zone. It’s good that we’re peppering the other goaltender and today we got rewarded for that.

Derek Forbort, on the team’s effort in the victory:
I think it was a pretty solid game throughout. We really didn’t give up much and I think, especially from a defensive standpoint, that we were hard to play against down low and we made pretty good plays coming out of the zone. So I think that did a good job at stymieing their forwards.

Forbort, on whether he liked their game before the five-on-three penalty kill:
I think we were playing pretty solid, but I think that penalty kill really kind of took us over the top. It was a huge kill for the boys and those guys out there did a great job and it definitely got the bench going and the crowd.

Forbort, on what his first NHL assist means to him:
Yeah, it was pretty cool. I didn’t really do too much. I just kind of made a little play to Toffoli and him and Carts just kind did the rest. I guess it’s not a bad play to get the puck into their hands, so that’s what I tried to do.

Forbort, on how he would assess himself after his first few games:
I think every game you get a little bit more comfortable out there. You get a little bit more used to the pace and the guys you’re playing against. I think this was probably one of my better games that I’ve played. I just felt comfortable out there and I think I had a pretty solid game.