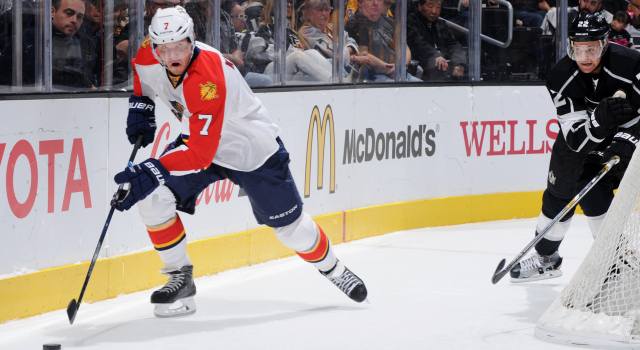 Jaromir Jagr, on whether the game changed after the five-on-three power play:
For one-and-a-half minutes, so we should be able to score. I had one chance there, but he made a good save. Luo was excellent this game, we just didn’t help much.

Jagr, on having the lead after the first period:
We had a lead, but we didn’t have many shots. We didn’t play our best game. I don’t want to think of an excuse, but we played two games in two-and-a-half days and tough teams. We have to somehow regroup and we have a lot of games at home. We have to make up for it.

Roberto Luongo, on whether he was particularly busy in the game:
They threw a lot of pucks to the net, especially in the second period. I made some good saves, but there were a couple goals I needed to be better on. You can’t have one or the other. You have to be strong on every play and you don’t want pucks going through you. I’m a little bit disappointed with a couple there in the second.

Luongo, on whether it was difficult dealing with the size of Los Angeles:
Yeah, that’s their team. They’ve won cups with that style of play. But if we want to go to where we want to be, we need to compete in those games. They play a simple game – physical, they get pucks in deep, forecheck, bang our D-men, throw some pucks at the net and put bodies on the net. There’s no secret recipe there. It’s pretty plain and simple and it brought them a lot of success.

Gerard Gallant, on whether the tide of the game changed in the second period:
Yeah, definitely. Getting out of that first period with a 1-0 lead, even though they were shooting at us pretty good, we’re pretty happy with that one. I liked the way we played in the firs t period. I loved the way we played in the third period. But the second period, they really took it to us and they scored those three quick goals.

Gallant, on whether he’s upset with the defense in their fifth consecutive loss:
Well, tonight we played a great team. I mean they’re playing well. To me, that’s the team that you’ve seen win two Stanley Cups in the last four or five years. They’re a hell of a team and they battled hard. They play a man’s game. We’ve still got some kids in there and we talked about it. We’ve got to step up and you learn a lot of things when you play a team like that. I thought tonight we came out after the second period and we talked about that during the intermission and that third period, I like the way we played and battled. So we learned some lesson from a real good team. They’ve got a good team, so I’m not disappointed. I’m disappointed for six or seven minutes tonight.