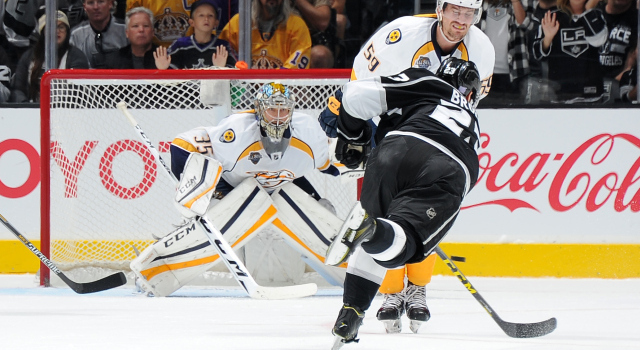 Darryl Sutter had pointed observations of Dustin Brown’s play on Thursday – he made a point to note on Friday that he wasn’t criticizing him – during an overlap between this season and the last in which the Kings’ captain has scored one goal since February 18.

“He’s continuing to work hard,” Sutter said. “I want him to play a more complete game. It’s not about scoring. We know he’s struggled to score the last couple years, but there’s a lot more to it. He’s got to play a complete game. Got to have an identity.”

Part of that identity is providing a consistent, north-south game with energy while serving as a netfront presence. With a $5.875-million cap hit through 2021-22, though, he’s also relied upon as a scorer for this Kings team, and since potting 18 goals in 46 games in 2012-13, hasn’t been able to replicate the offensive marks established earlier in his Los Angeles tenure, and his shooting percentage has dropped.

With only one goal on his last 89 shots, has there been a change in where his shots and scoring opportunities are coming from?

“They’re tracking that. I’ve talked to Payner quite a bit about it,” Brown said.

They might be on to something. League play-by-play logs provide records of the distance of every shot taken, and this year, Brown’s shots on goal and missed shots during five-on-five play are coming at an average of 36.0 feet from the net. In the previous eight seasons, courtesy of data provided by BehindTheNet.ca, the average distance of a Dustin Brown shot ranged from a low of 30.0 feet in 2009-10 to 33.9 feet in 2011-12. This year’s average is over two feet beyond the previous statistical outlier amongst the available data, which dates back to 2007-08.

“The last few games, there’s been a couple less chances. I mean, there were a couple chances in St. Louis where I’m just not corralling the puck properly. That happens,” Brown said. “I’m not sure how many I had last game, but that’s more about getting in and around the net and getting those prime scoring chances. Talking to Darryl today, I’m getting there and maybe rushing it a little bit instead of just taking half a second longer to just lift it.”

Sutter had spoken Thursday about the efforts to involve Brown in special teams situations “to regain his 200-foot game.” That game doesn’t appear to have faltered; by the eye test, he’s still an effective forechecker and a physical presence – though his penalty plus/minus, long one of the league’s best, is a minus-two in five-on-five play, for whatever that’s worth this early in the season. (Not much.)

This, of course, follows an off-season in which Brown reported to training camp in terrific shape, according to those inside and outside the organization, and Brown himself.

“It’s very difficult sometimes when you want to score and you’re expected to score and it’s not going in for you to, like I said, keep the rest of your game where it needs to be, because especially with the way we play, it’s a big part of our game. Is it surprising? Yeah, but I’m just trying to stay with it. Again, I think I’ve had shots every game – good chances, good looks. We’ll see. Keep working at it.”

Dustin Brown, on generating scoring opportunities:
I feel like I was getting good looks, I’m just having a hard time finishing right now. The one thing that changes when you go from playing with Kopi to playing with Shoresy is the type of defensemen you’re playing against. So I should try to take advantage of that.

Brown, on finishing:
I think the last couple games I’ve been maybe gripping my stick too tight, but prior to that, I’ve been getting a lot of good chances right around the net. I’ve just got to keep going at it. It’s funny how it works. Sometimes when you get one, then the [Reporter: Floodgates open.] Yeah, exactly. Just try to stay focused on other areas of the ice because there’s a tendency when you’re not scoring maybe to get away from all the other details of the game that make you a good player in other areas, so it’s important to draw attention to my checking, and those small details will all [inaudible[ sort of thing, and keep getting around and digging around the net.

Advanced stats via Behind The Net, War-on-Ice