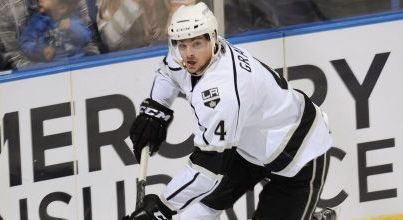 –The Reign struggled in their preseason games against the Gulls, dropping 3-2 (SO) and 5-3 decisions in early October. This is the first of 12 meetings between the teams in the AHL regular season. “I think you’ll see that the rivalry will officially start tonight and probably build as the season goes,” said Reign head coach Mike Stothers.
–After winning their first five games of the season, the Reign have dropped their last three, dating back to Friday’s contest against San Antonio. In those three losses the team is averaging just 1.67 goals per game. “You’ve got to play pretty darn good defense if you’re going to win game when you’re only scoring 1.6. … I think it’s a matter of bearing down. We’re getting shots. Now we need to bear down on second opportunities,” Stothers said.
–The Reign (no surprise here) will feature Peter Budaj in net for his eighth start of the season. Budaj is second in the league in wins (tied with 5 wins) and goals-against average at 1.54. “Buds has played extremely well … he’s got the nod tonight,” Stothers said.
–Tonight’s tilt marks the return of winger Paul Bissonnette, who has missed the last five games with the groin injury. It will be his first in front of the home fans.
–After the game the Reign will host their first of six player team parties where fans can interact with players at a nearby local restaurant. Tonight’s event will be at 4th & Mill (11260 4th St., Rancho Cucamonga, CA. 91730). Expected players in attendance, though subject to change, are captain Vincent LoVerde, forwards Bissonnette and Nic Dowd and defensemen Zach Leslie and Kevin Raine.

–The Gulls feature Nick Ritchie, an eight goals in eight games player this season, who was drafted by Anaheim as their first pick in 2014 at 10th overall. “Obviously he’s a threat on the ice. He’s a scorer,” Stothers said.
Stothers added: “He plays a physical game, he’s a big, strong kid and he’s got a nose for the net. That makes him a pretty valuable commoditiy in today’s game. We’ll try and pay attention to him but they’ve got a lot of good players over there. Their record is very impressive, so we know it’s going to be a very physical contest. They’re a physical team so we’ll try and match them and try and get them on their heels and maybe use our speed.”
–The Gulls have won their last three games, including an overtime victory on Tuesday over the San Antonio Rampage, a team Ontario could not beat in two overtime tries last week.
–Expected in net for the Gulls is a familiar name in John Gibson (5-0-0-1), the Ducks prospect who has seen NHL playoff time in his career, most notably in 2014 during the Kings playoff run to the Stanley Cup where the Kings beat the Ducks in 7 games.