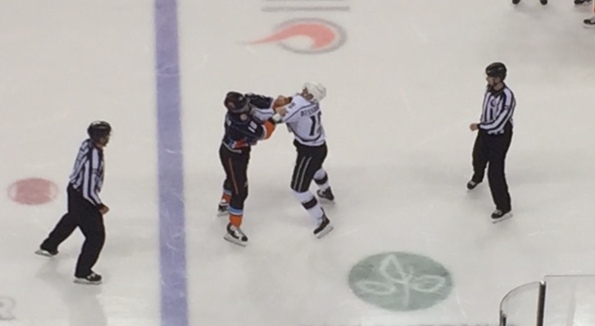 Head coach Mike Stothers, on Kempe’s breakout game:
We have kind of been waiting to see the Kempe we saw last year in the playoffs. I thought he had an OK training camp. I thought he’s been good for us in the early juncture here in the season but he’s the type of kid that you know there’s more there. And I think tonight, not just because he scored three goals, that was great, you just saw the hockey sense that he has in the offensive zone. You just saw his ability and I hope it’s a real confidence booster for him and I hope he builds on it.

Stothers, on what Kempe did well:
I thought he utilized his speed well and I thought he had them backing up, which is one of his strengths. And I think you saw his uncanny ability to go to the net and be puck-ready. His release is terrific, so I think it’s a great night for him. It’s good to see.

Stothers, on the rivalry:
I think it’s early to say rivalry yet but with the way the game was unfolding I think you can expect some very entertaining hockey games between us and them. And you know what? I look forward to each and every one.

Stothers, on Bissonnette’s first game back:
Biss did a very good job for us. He’s everything as advertised: he’s energy, he’s hard-working, he’s tough and he’s a great teammate. He’ll do anything for his teammates, whether it’s fight a McGrattan or even if you shorten the bench and he’s a guy that’s sitting on the bench he’s still talking, chirping, yapping, talking. It’s unreal. It never ends and that’s what you get with him day in and day out.

Stothers, on the team overall so far:
If we can keep playing the way we’ve been playing as a team and as a group, tonight Kempe stepped up and Crescenzi gets two power play assists and that’s the kind of things you need. You need guys to be able to chip in and help and maybe next game Kempe’s not going to be able to score, maybe Crescenzi’s not going to set it up and somebody else picks it up and we’ll be talking about a Brodzinski or a Zykov.

Stothers, on the difference tonight:
We skated. We skated. I don’t think we match up real well from a physical standpoint with them: they’re big, they’re heavy, they’re legitimately tough. They’ve got some guys who can mix it up if they want, and we can too, but we played a good team tough. We didn’t rely on anybody to address situations. You might have noticed that if there was a scrum in front of their net we had three forwards in front of the goalie. And if there was a scrum in front of our net we had five players in front of Buds. I think that is the strength of the team and the comradery. Speed is intimidating, just like toughness is intimidating. Speed can intimidate and you know what, when we’re skating we can back some teams off.

Adrian Kempe, on which goal was his favorite:
I’ll say of course the third one was the favorite but the first one was pretty nice goal I think. I had a good opportunity all three goals but I would say the third one for sure because it was the hat trick goal.

Kempe, on the rivalry brewing:
They’re a real tough team and we are too. We’re going to play them a couple times this season so it’s going to be a rival and they’re always tough games. It was tough games in the exhibition games too. We saw it out there tonight, it was a really tough game.

Kempe, on where this hat trick ranks:
Probably the best hat trick I’ve ever had because it’s professional. I had a couple in junior but this was probably the biggest one for sure.

Paul Bissonnette, on his first in front of the home crowd:
It was good, good energy especially for a Thursday. I thought we came out pretty good there, especially in the first five minutes we really established our game and played a really solid game.

Bissonnette, on his fight with McGrattan:
He was running around a bit in the second and then he had been out there for about 20 seconds and then I took JST off and kind of tapped him on the shinpads and he was… typically when you’re in a shift you don’t fight at the end of it because you don’t want to be tired. So he just basically was like whenever we’re both out there and have energy – that ended up being the third period. We were kind of in a lull there and he had scored at the end of the second so it was just a good time.

Bissonnette, on the fans not throwing hats on ice for Kempe:
Maybe they were confused, I don’t know. A few people threw them over and then I just figured I’d give them back because it wasn’t enough to put them in Kempe’s stall.

Bissonnette, on the chippiness:
They have a pretty tough team, a physical team. I think the way we responded was awesome especially Dermie getting in there at the end there for Backy. It goes back to last year’s concept with Stuttsy. He likes it when guys stick up for each other and it’s a boys’ club here. In front of the net we want five guys and even if you’re not tough he wants you sticking up for the boys and I think everyone’s bought in, especially last year with winning it. That’s the mentality we brought every night and we responded really well tonight with that team.

Andrew Crescenzi, on his contributions:
It was huge for our team, we came to the game saying we wanted to get at least one or two power play goals to help our momentum and anything I can do when I get on there to help us score it’s a bonus so I was glad with that and we just have to keep our power play going.

Crescenzi, on beating a tough team like San Diego:
Gibby is a great goalie, I played with him in Kitchener, so I know all about him and we just need to get shots on him and hope for some lucky bounces and get some breaks and I thought we did a good job of that tonight.

Crescenzi, on the win:
It was huge. Last weekend wasn’t really that good for us. We knew we had to come out and get the two points and set the tone because we’re going to play them 11 times. So it was good to set the tone and it’s going to be a great battle all year between them.

Crescenzi, on his expanding role:
I’m trying to take on more of a bigger role and responsibility this year so obviously the two assists is huge and the power play time was big too.

Michael Mersch, on his goal:
Their guy lost his footing around our blue line and we were able to have an odd-man rush and Dowder passed it over to Vinny and Vinny passed it over to me and I was able to get my own rebound off my shot. We had a couple chances off that post actually and they just weren’t bouncing in for us. It was fortunate for me to get that one in.

Mersch, on the special teams:
Kempe had two goals on the power play, which is huge. It was great for him to get the hat trick, a little confidence boost. Hopefully it will help our team score more goals, which hopefully will help us win more games.

Mersch, on his line with Dowd and Zykov:
Z’s a first-year player and there’s growing pains and I think he’s doing a really good job though, a lot better than I was in my first half. He makes good plays, has good offensive ability and he hit the crossbar tonight but they’re going to start going in for him. It happens to everybody. Those pucks are going to start going in for him and Dowd’s great down the middle, great distributing the puck.