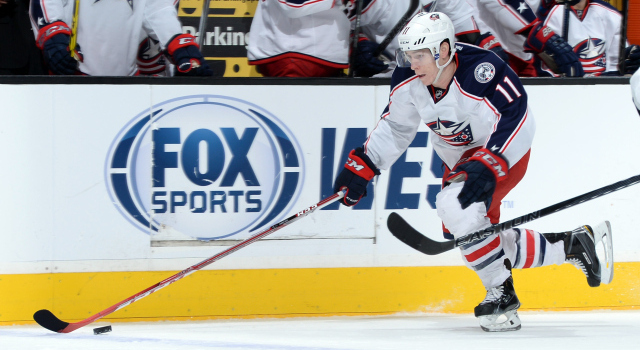 Nick Foligno, on whether they need to play an aggressive game:
I don’t know. You know what, I didn’t like the hit on Hartsy. It’s part of the game. I think it was good for me. I felt more in the game. … You’ve got to get emotionally involved and I was really proud of our guys. We didn’t have our best game, but found a way to win again. When you do that, you give yourself a real good chance.

Foligno, on holding the lead after not getting a shot on goal in the second period:
That’s what you’ve got to take away from it. It’s a positive when you’re not playing your best. You’re not really creating much, but you’re still keeping the score the same. [Bobrovsky] was outstanding for us. Big plays by some big guys, Jack made a hell of a play to get that goal for us, that insurance goal, and then [Greg Campbell] put it in. I’m so happy for him. We’re getting contributions, you can see it. We’re getting breaks and guys are starting to get their confidence going. We’re finding ways to win. It beats the other way, that’s for sure.

Scott Hartnell, on whether the confrontational style of the game favored them:
Yeah, we haven’t had one of those games in a while. It felt like back in the ‘80’s where everyone was chirping after the whistle. There was a couple big fights and Nicky led us the way there with a great fight against Clifford. We followed suit. We were in the battles. We were hard. Defensively, I think we weren’t great tonight, but Bob was there when we broke down and made some big saves. We were on the edge that whole night. It was great.

Fedor Tyutin, on whether they gain confidence from a win in Staples Center:
Oh, for sure. For sure it gives us a boost. Everybody knows they’re a good team and it’s a hard building to play in. That’d be good for us. We need wins right now and everybody knows the kind of situation we’re in. We’ve kind of taken day-by-day, game-by-game and that will be good for us.

John Tortorella, on which areas of his team’s game he was most proud of:
Well, just after a second period where we don’t get a shot on net, I don’t think we gave them that much either. I just like the spirit of the team. They fought for one another. If someone was in trouble, they jumped in. We were getting to their blue. In the third period, I thought we defended well and battled. The team is bumped up. In that type of game, you’re going to get bumped up. But it’ satisfying because I thought they played the right way. It’s the beginning of an identity. That’s what we’re striving for, an identity. And I thought tonight was a good step in trying to play the right way.

Tortorella, on how the team regrouped before the third period:
We just talked about wiping everything clean from the 40 minutes, starting again and just trying to play territory. And quite honestly, I thought we made more plays in the third period, just with puck poise and defending properly, than we did in the first two. So it was a good period for us. It’s a good win for us. A team, again, fighting to get some sort of traction and consistency played against a really good hockey club that’s been playing very well, and we found our way. So I feel good for the guys. Having said that, it means squat come tomorrow because we need to keep winning. Because we’re in that big of a hole, so we need to rest up and get ready to play a pretty good Anaheim team.

Tortorella, on whether his team has to play with an edge to be successful against Los Angeles:
Yeah, we know what LA is. LA is a well-rounded, hard team to play against. They play straight ahead and it’s the type of hockey we’re trying to play. So as we introduced our first meetings for this game, it was about it’s a great situation for us to try and develop a step in the right direction with identity. And I thought they did that.