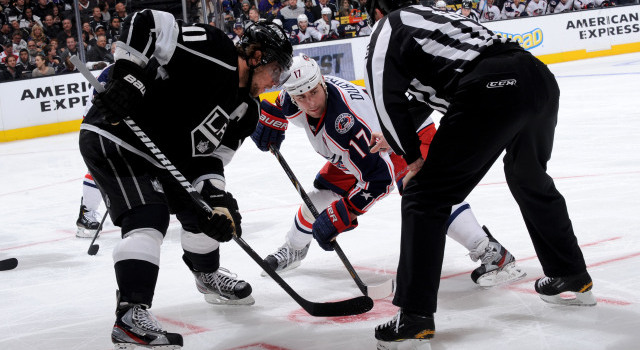 Good morning from El Segundo, where the majority of the Kings have left the ice and are taking part in team meetings in advance of tonight’s Suite Night game against the Columbus Blue Jackets (7:30 p.m. / FOX Sports West / KABC 790 / I Heart Radio).

-Anze Kopitar confirmed that he’ll play tonight. “I was lucky that it hasn’t happened to me before,” he said. “Maybe that’s why the little bigger concern is, just because you don’t know what you’re really dealing with. But I went through all the protocols, [what] you call it. I feel good, and the tests are good, so I’m good to go for tonight.”

-Derek Forbort and Matt Greene remained on for extra work; neither is expected to play tonight (and Greene is on injured reserve). The rest of the team left at roughly the same time, which caused some confusion in the #LAKingsGoalieTweetOff. Jhonas Enroth, who is coming off a shutout, was the first goaltender off, but before the ink on the tweets could dry, Jonathan Quick (and virtually the entire Kings team) followed. Enroth said that he’s not starting. Expect Quick to start against Columbus.

-Jordan Weal appeared to serve as an extra in line rushes; from what we were able to gauge upstairs, it appears as though Kyle Clifford and Jordan Nolan will flank Andy Andreoff.

-Via Aaron Portzline‘s report yesterday, David Clarkson was placed on injured reserve, Kerby Rychel was recalled, Rene Bourque skated with Gregory Campbell and Jared Boll, and John Tortorella said “he wasn’t sure” if Alexander Wennberg, who missed Tuesday’s win over San Jose with a lower-body injury, would play. Do yourself a favor and follow Aaron.