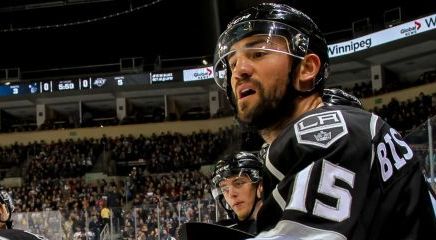 –Forward Paul Bissonnette will make his return to the lineup after missing five games due to a groin injury.

“I feel good out there, so excited to be back,” Bissonnette said after morning skate. “I haven’t played at home yet so that’s kind of cool. Just get to know the fans I guess, hopefully in a good way.”

Head coach Mike Stothers said he’s not sure who will play yet with Bissonnette, joking to say “there’s not a lot of volunteers to have him on his line.” But all jokes aside, the veteran’s return is much welcomed.

“We’re getting Biss back, which is good, gives us a little veteran presence. Gives us some energy,” Stothers said.

The addition of Bissonnette at left wing, is “definitely going to affect other lines,” Stothers said, but added “they’ll stay together,” when asked about the top line of Michael Mersch-Nic Dowd-Valentin Zykov.

Bissonnette, who said he’s hoping to get some fourth-line time with Ryan Horvat, is looking to help the younger players around him by creating energy and playing physical.

“Now that I’m back against this team you feel like you can be out there and protect them, and neutralize that, where the other guys can just focus on the game,” Bissonnette said.

–Goalie Patrik Bartosak, fresh off his meeting with his surgeon in Los Angeles on Thursday morning, was at Citizens Business Bank Arena after morning skate and very upbeat about the news he received.

“Positive things. It’s healing better, the way it’s supposed to be, so I should be ready within a couple weeks,” Bartosak said of the injury to the thumb on his catching side. “Exactly the way it was supposed to go,” he said about the recovery, “and maybe a little faster than I expected it to be but I’ll take that for sure.”

Bartosak said the surgeon did the usual, checked his thumb for range of motion, strength and recommended he continue to wear a brace for on-ice activity. Bartosak, who just started skating this week after having surgery in early October, said he’s used to the brace (so no big deal there) adding, “it doesn’t bother me in my glove.”

He wore a similar brace last year with the Monarchs.