Reaves fined for “roughing” Kopitar; no status update yet 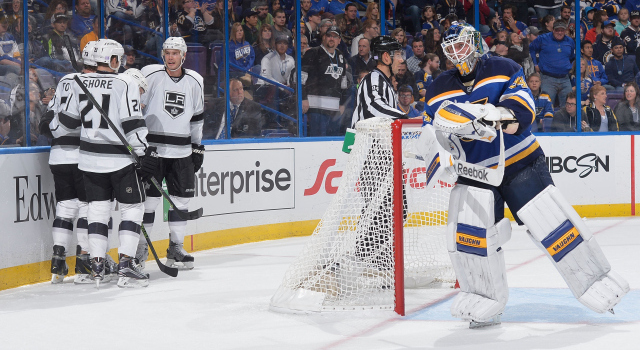 The NHL’s Department of Player Safety issued Ryan Reaves the maximum fine allowable for his first period contact with Anze Kopitar’s face during Los Angeles’ 3-0 win at St. Louis on Tuesday night. No penalty was assessed on the play.

St. Louis's Ryan Reaves has been fined $3,024.19, the maximum allowable under the CBA, for roughing on Los Angeles's Anze Kopitar.

No word on Kopitar’s status that added clarity beyond Daryl Sutter’s post-game observation that “he’s feeling better” was revealed in an email exchange with hockey operations this morning. More on Kopitar should be learned at the rink later today. The Kings are scheduled to report to Toyota Sports Center at 12:00 p.m.

As of now, there is no more information on other potential player safety infractions.

Scottie Upshall was not penalized for this springboarded elbow to Tyler Toffoli’s head away from the play:

Nor was Alexander Steen assessed a minor penalty for this forearm to Brayden McNabb’s face, which appeared somewhat similar to Dustin Brown’s play on Jason Pominville in the 2012-13 season that resulted in a two-game suspension. To be fair, the GIF below is grainy, and Steen may have made more contact with his forearm than his elbow.