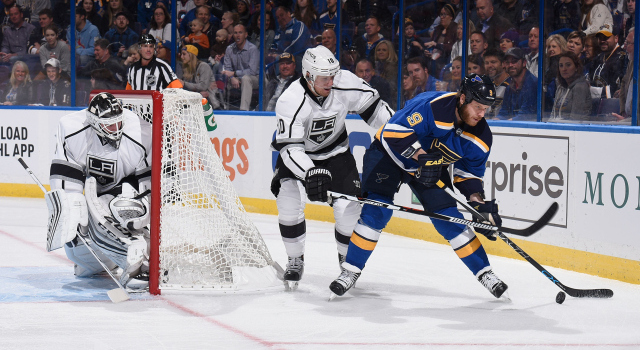 A day after he posted a 24-save shutout over the St. Louis Blues, Jhonas Enroth was a popular topic around the Kings’ facility. Though he wasn’t pressed into as much high-tension action as he was when making his regular season Kings debut in San Jose two Thursdays ago, he was very good in earning his sixth career shutout. One of those shutouts was a 1-0 Buffalo win over Los Angeles last December.

“When he plays on his game, I think he’s very technically sound,” Goaltending Coach Bill Ranford said. “There’s not a lot of movement to his game. Where he gets into trouble is when rebounds start getting away from him. We talked about it this morning, his rebound control wasn’t as good as it was against San Jose, but he was making sure that he was in the right position for that next save, and that’s really what it’s all about.”

Though Enroth appeared to catch a piece of an Alex Pietrangelo shot that also glanced off the outside of the post early in the first period, St. Louis wasn’t credited with a shot on goal until more than halfway through the 10 minutes into the game. No matter: the 27-year-old established a healthy rhythm.

Ranford also spoke about working with a goaltender of Enroth’s stature – the Swede is listed as 5-foot-10 and 166 pounds – as compared to the more modern NHL goalies. Martin Jones, who was in the Kings’ system from 2008-15, is six feet, four inches tall.

“I think it’s no different than what we dealt with with Jonathan and a guy like J-F that aren’t as big as some of these giants that are out there today,” Ranford said. “Both Bernier and J-F, when they came out of the American Hockey League and get more to the NHL shooters, they had to adjust their depth, and it’s just something that I talked to Jhoni about when he got here, and I think it’s a little bit of a trust factor. He was always worried about the back door. I tried to instill in him that our job is to limit those options and not give up those opportunities, but you’re going to be responsible for the shooter, and I think as training camp moved along, he started to get more and more confident and he was allowed to add a layer of depth to his game, which obviously is going to give you a better chance to stop the puck.”

Matt Greene doesn’t appear to be on the cusp of making his return to the Kings’ lineup.

Though he said he’s “getting better every day,” there are still several hurdles to clear before he’s ready for game action.

“I still haven’t skated in a real practice,” said Greene, who, along with fellow North Dakota alum Derek Forbort were the only players to take the ice on Wednesday.

“I haven’t taken contact or anything, so it’s a matter of doing that stuff, and then also getting a feel for that, playing real hockey, playing with some contact, taking some hits.”

Greene didn’t travel on the two-game Central Division swing, though he had a keen perspective on the club’s quick road trip from watching on television.

Defenseman Jake Muzzin has six points (1-5=6), 22 shots on goal and a plus-eight rating over the last nine games, a stretch in which the Kings are 8-1-0.

“The first couple games as a team we weren’t very good, and I know personally I was trying to do too much and got away from what makes Jake Muzzin successful and what I have to do to provide a service for the team, and that’s to defend,” the fifth-year King said.

Similar to what has been shared by the club’s coaching staff, the defense’s ability to generate offense starts by being stout in the defensive zone, even though there are versatile puck-movers capable of providing offense from the back end.

“When you get away from what your service is, you’re not providing anything for the team. You’re more of a liability than anything,” Muzzin continued. “Back to hard, physical, defending top guys and let your offense come when it comes, and try not to force it. It’s crazy how the game works. Less is more, and then you get more opportunities when you’re focused on your defense. I don’t know what it was. Maybe being hurt early in camp and not getting the amount of games you want to get in before, and then not having the right focus and game plan going into games, but we turned it around as a team, and personally I feel way better about my game and what I have to do to be successful to help the team.”

He’s not the only one whose game has strengthened during the streak. Drew Doughty was praised earlier today by Darryl Sutter, who also noted that Brayden McNabb’s game took a step forward on the road trip.

As for McNabb, one of four defensemen in their 20’s to earn more than 20 minutes of ice time per night, Muzzin has taken notice of the defender’s poise in his defensive zone as well as his ability to step up to a larger role and defend top players.

“He’s done an awesome job,” Muzzin said. “Him and Dewey are working well. I think you’ll see some more offense will come. He’s undercover good with the puck, very creative on the point, and when it continues going, you’ll see more of it.”

More from Jake Muzzin, who spoke at length with reporters on Wednesday:

Jake Muzzin, on offense coming from strong defensive zone play against St. Louis:
Yeah, we did a great job defending the rush, not giving them a lot. Quick in our zone, little plays getting out, and we get offense from doing things right in our zone.

Muzzin, on clearing pucks out of traffic and danger areas:
Being calm and not being too busy in front of the net and do your job and let the guys do their job, and you trust everyone else to do their job. You trust the goalie to make a save when he needs to, and you’ve got to clear the rebound. You can’t try to block the shot or take two guys at once or do too much. Just do your job and do it well.

Muzzin, on whether he knew much about Jhonas Enroth before training camp:
No, not much, but he can play, man. He kind of turns into a different guy when he’s in the net there during the game, and he’s vocal, but he’s calm. It gives you confidence. He’s there. He’s going to make the save, and away you go.

Muzzin, on any adjustments when playing with Enroth as opposed to Jonathan Quick:
Maybe just that he’s new to the team and it’s just a new personality, a new guy. As far as making the saves and playing goal, there’s not really that much of an adjustment. You let him do his thing, and you do your thing, and he’s done a great job for us, and he’s continuing it.