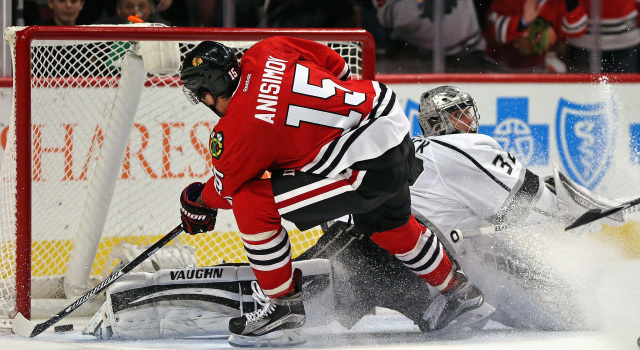 Patrick Sharp, Marian Hossa and Duncan Keith may have moved on or been absent from Monday night’s rivalry game, but hey, no worries, Chicago – Patrick Kane and Jonathan Toews still exist. The Blackhawks’ superstars left a clear imprint on Los Angeles’ 4-2 loss at the United Center as the Kings, who found iron twice in the second period while leading 2-1, couldn’t build a two-goal lead and lost for the first time in 2015-16 when leading after two periods. An early third period Kane goal set the tone for the final 20 minutes as the winger danced through the neutral zone before unleashing a quickly released and well-timed laser between Alec Martinez’s legs that snuck up on a screened Jonathan Quick and whistled through space just underneath the crossbar, and, some 10 minutes later, issued a no-look, backhanded, behind-the-net pass right onto the stick of Teuvo Teravainen, who snapped the feed high on the shortside. It was an unfortunate turn of events for Jonathan Quick, who had robbed Kane on a sharp wristshot in the second period and twice denied Artemi Panarin on clear breakaways. Chicago may very well be the most skilled team in the league, and the manner in which they scored goals on Monday served to underscore that thesis.

Los Angeles just isn’t getting much from wingers who go by names other than Tyler Toffoli or Milan Lucic right now. You can get by with that when Toffoli is on an ungodly tear and Lucic is scoring big goals, but when looking to build a two-goal lead on the road, it would be of great value to diversify scoring, and that hasn’t quite happened yet. This season, only one five-on-five goal has been scored by a winger other than Toffoli or Lucic: Marian Gaborik’s high slot snipe against Colorado on October 18. Tanner Pearson (one power play goal), Dustin Brown (no goals) and Gaborik (one goal) are on a scoring slump, leading to Anze Kopitar’s goose egg in the assists column this season. As of now, Gaborik’s lack of production is a concern. Los Angeles acquired the winger two seasons ago as a means of enhancing the skill in its lineup, and at the outset of this season, he hasn’t yet been able to infuse his gifts with the team’s attack on a regular basis. Gaborik did direct five shots on net last night, so hopefully for the Kings that’s a sign that he’s ready to establish an offensive rhythm. He scored twice the last time Los Angeles visited St. Louis.

There were quite a few unfamiliar names to the L.A.-Chicago rivalry on both sides. While an early season Kings narrative has been that younger but tested and mostly highly accomplished players are now forming the front end of the team’s blue line, there are somewhat similar observations that can be made about the Blackhawks’ entire lineup. While Los Angeles has continued to operate with a strong structure and has maintained its traditional possession game – the solidified culture inherent in a pair of Stanley Cups go a long way towards off-setting any setback that could accompany roster turnover – Chicago has had a similar experience. Drew Doughty summed it up well when speaking with reporters yesterday morning. “I think Toews is right there as one of the one, two, three best players in the world, and his leadership, I know, from experience, is phenomenal, so when guys come in, and they watch what Toews does on and off the ice, it’s hard for it not to be contagious, so I expect all of these young guys to be good players, and they’ve won those three Stanley Cups because they have depth, so they’re going to be a good team,” he said. Bingo. Those inner expectations and that championship experience will be why the Kings and Blackhawks, should they qualify, be undesirable playoff opponents. 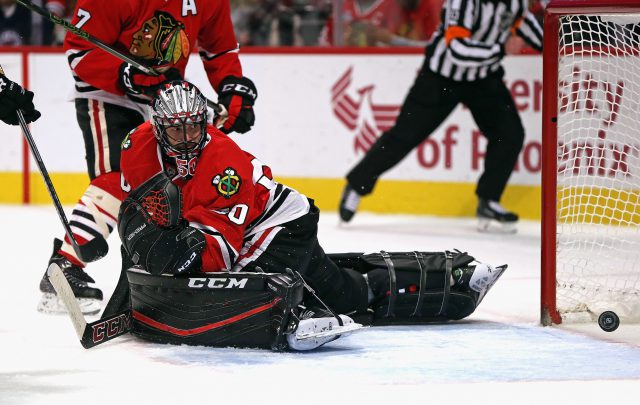