So, what’s up with Marian Gaborik’s slow start? 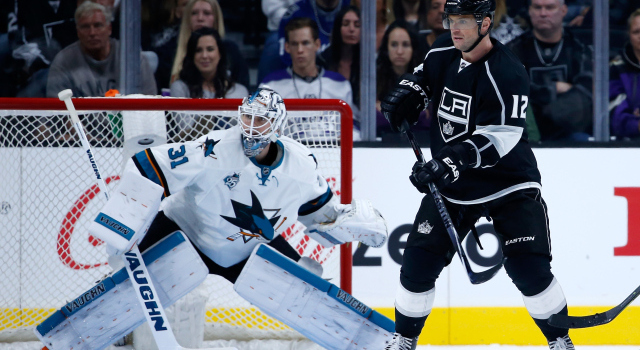 From any type of glance at the primary or secondary statistics, there’s little reasoning behind Marian Gaborik’s early season slump. There doesn’t seem to be anything previously suggesting an aging decline; in 2014-15, he established the best possession rates of his career and finished with a shooting percentage that was well above his career average. He scored 27 times in 69 games, which included a team-best 10 power play goals. Based on all available data, his off-season player evaluation concluded with the line, “It appears to be status quo with Gaborik – and that’s not really a bad thing at all.”

With one goal and one assist through 11 games, one could chalk up his early lack of production to an unlucky start to the season – his 92.5 PDO is seven full points below his previous career-low amongst available data – Darryl Sutter has seen something he’d like the 15-year veteran to focus on.

“He needs to be closer to the net and needs to finish, clearly,” Sutter said. “Two easy things to address.”

A check of the information at SportingCharts.com, a site that contains information on players’ average shot distance, indicates that Gaborik’s 24 shots this season have come from a distance of just over 25 feet, and that’s not out of whack with what his career averages are. Five of those 24 shots came in last night’s loss to Chicago, so perhaps that’s a signal that the traditional goal scorer is starting to get back on track.

“The shots haven’t been there for me as much as I’d like to, so it was nice to get some shots, but I obviously need to do more to help this team, and that’s just the bottom line,” Gaborik said. “I need to do more overall.”

The 33-year-old got off to a sluggish start a year ago, totaling only eight points through the team’s first 30 games (though he only played in 18 of the 30). He’s yet to rekindle his chemistry with Anze Kopitar, and has seen time alongside Nick Shore and Trevor Lewis when things haven’t clicked alongside Los Angeles’ top center.

“At this point, we’ve been together on and off, and whoever I’m there with, I just need to find my game to where it needs to be, wherever, whichever position I’m going to be in,” he said. “That’s the bottom line. I have to do that.”

He’s not the only forward going through a dry spell. Outside of Milan Lucic and Tyler Toffoli, both of whom have done some heavy lifting offensively, the only five-on-five goal scored by a Kings winger this season came off Gaborik’s stick in the win over Colorado three Sundays ago.

When he faces the St. Louis Blues tonight at the Scottrade Center, he’ll look to reprise the pair of goals he scored in the building last year, if not the end team result. Los Angeles ceded the last four goals of the game on December 16 and lost, 5-2.

“[Those goals were] just from areas right in front of the net,” Gaborik said. “One was a power play goal, one was a 5-on-5 goal, so I just need to get into those areas a little more, and like they always say, find those ugly goals and just try to drive the net and create some opportunities there, and try to play well defensively, and offense comes from there.”

Like any premier goal scorer, his goals have traditionally come in a multitude of ways. Wristers from the slot – like his goal against the Avalanche. Rebounds. “Bang-bang hands plays” around the net, as Sutter referenced a day after last year’s game in St. Louis.

Gaborik is an established player with a long NHL history, and he fully understands his role and the challenge.

“You win games with goals, obviously, but a lot of things come into play before that, and of course I don’t like my production, that’s the bottom line,” he said. “I need to be better, but just the overall game, it comes down to the little things, doing the little things right, and just go from there.”