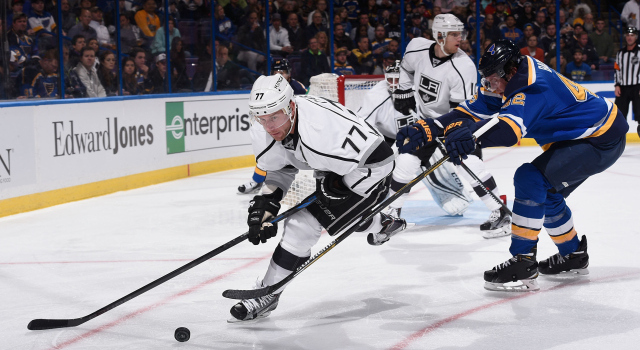 Tyler Toffoli, on how the team regrouped after Anze Kopitar left the game:
I think we found a way. Kopi is obviously a huge part of our team and I think we all found a way to dig deep and that was a huge two points for us. We need it.

Jordan Weal, on the feeling after a “gritty, gutsy” road win:
That’s exactly what it was. It was a physical game there. They’re a big strong team and I thought a lot of guys dug deep when Kopi went down there. We needed some guys to play a little extra minutes and they did it well. It’s good to come away with the two points to finish the road trip.

Weal, on his impressions of his first game against St. Louis:
It was fun. It’s high intensity and high paced. We had a lot of good shifts. We were hemming them in their end, making plays and we limited their shots. When you can do that against a team that has the scoring power that they do, we’re going to give ourselves the best chance to win.

Jhonas Enroth, on how it feels post a shutout:
It’s a really good feeling. Obviously you want to play as many games as you can, but we have a very good starter here and you just have to be sharp when you get your chance and try to steal as many points as you can.

Enroth, on whether he’s trying to make the most of each opportunity before he becomes a free agent:
I don’t really think that way. I’m really just here to stop every puck [I] can and I really don’t think too much about contract situations and stuff like that.

Enroth, whether it feels good to get a split on the two-game road trip:
Yeah, definitely, especially after the loss yesterday. It’s two tough teams here and it’s nice to go home with at least two points.

Enroth, on how he feels after his first two games with the club:
Pretty good starts, I mean even training camp, I played well in the games there, too. I’m just trying to make the most of every game I get. I know what I can do and I feel like I can play in big games in this league.

Jamie McBain, on his travel schedule after his wife gave birth yesterday:
Yeah, it’s been pretty hectic. Obviously a few flights and some craziness, but it was exciting to be back there with my wife yesterday and be a part of my kid’s first day. But it felt good to be back with this group as well.

McBain, on the team needing everybody:
Yeah, they needed everybody. That’s the way it goes in a back-to-back, especially against these two teams in Chicago and St. Louis. I mean they’re both such heavy forechecking teams and we definitely have to have everybody every night.

McBain, on the feeling on the bench when Anze Kopitar left the game:
I mean obviously you’re never going to replace a guy like Kopitar for the game, but the next guy has to step up and make sure that they’re filling roles and guys that maybe aren’t going to play as much, again, have to step up and play those minutes. I think we were able to do that tonight with some line shuffling and guys stepping up and getting the job done.

McBain, on Jhonas Enroth’s performance:
He played amazing. He had some incredible saves and kept us in it there for a while when they were pressing and that’s a great accomplishment for him and we have all the faith in the world in him. He did a great job tonight.

McBain, on whether he’s running on adrenaline:
Yeah, not much sleep. I tried to catch up on the flights. I did have a nap today, but anytime you’re back with this group of guys and you’re back on the ice, adrenaline will just take over and you’ll just go play the game.

Jeff Carter, on how the team kept pushing after losing Anze Kopitar:
We all know what Kopi means to us and you take someone like that out of the lineup, it’s a big hole. But I though collectively, as a group, we had wingers playing center and pretty much every shift it was a different line combo. So everybody really stepped up and took charge. A lot of young guys really stepped up, too. Like I said, you don’t want to lose Kopi but it was a good opportunity for those guys to be in a tough game like that. It was a battle there tonight and I thought they did a really good job.

Carter, on whether the focus heading into the third period differed after the loss in Chicago:
We know what happened last night. We let our foot off the gas and it bit us in the [butt.] But we rarely back it up. We know what to do. We’ve been in the situation enough and guys really responded tonight. It was good.

Carter, on whether he is exhausted after 23:20 of ice time:
You know, it actually felt really good. It’s weird. I’ve played games like that before where you’re playing over 20 minutes and you really almost feel better because you’re never out of the game. Like you’re in and pretty much every other shift you’re going. So I enjoy it.

Carter, on whether he wants a lot of ice time like Drew Doughty:
Yeah, all of us want to play. Like I said, for myself, personally, the more I play… you’re just into it. You’re not sitting there for three or four minutes and, I don’t want to say you lose focus, but the more you’re out there and you’re constantly in it, it’s easier.