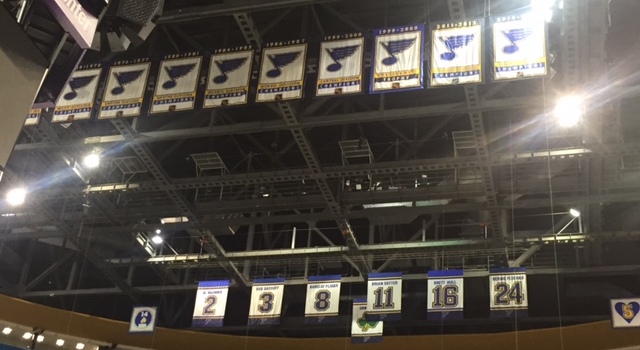 Good afternoon from St. Louis, where the team is most likely digesting lunch and catching up on nap time in advance of tonight’s tilt against the Blues. Several notes from today’s skate:

-The only projection I’m comfortable making is Jhonas Enroth starting in goal. Enroth, Jonathan Quick, Derek Forbort and Jordan Weal were the only players to take the ice this morning as most of the team took part in team meetings and off-ice workouts before leaving. Enroth was the first goaltender off the ice, while Quick and Forbort remained on for the most work. Weal came off between Enroth and Forbort/Quick, but I’m not sure if he’s going to draw into tonight’s lineup.

-I also didn’t get a firm answer on whether Jamie McBain would fly to St. Louis and play today after he and his wife welcomed a baby boy into the world yesterday. I don’t think that’s something that the team would want to tip its hand towards, so we’ll most likely have to wait for warm-ups to see if McBain is on the ice. That Forbort remained on for extra work could serve as an indication, not a confirmation, that McBain is en route. Wait for the song.

-Lou Korac has your Blues projected lines over here. The home team will be without Paul Stastny (foot), Kevin Shattenkirk (lower body), Jaden Schwartz (ankle) and Patrik Berglund (shoulder), while Scott Gomez and Chris Butler are expected to be scratched. Jake Allen will start in net.

-Tonight’s game will be televised on NBCSN with John Forslund and Brian Boucher providing the call. Puck drop is scheduled for shortly after 5:35 PT. Nick Nickson and Daryl Evans will provide the KABC 790 / I Heart Radio broadcast. Darryl Sutter quotes are below; one quote on Marian Gaborik was withheld for a story I’m writing this afternoon. Thanks for reading, Insiders.

Darryl Sutter, on how the Kings turned their season around:
I don’t think there’s one thing in particular. I think we’re a different group, a lot of guys different guys playing different roles. I think there’s a big adjustment. I think we’re still adjusting. I don’t look at it as a “turnaround.” We’re 7-4, and if you would’ve broken that up into a loss and a win and then two wins and a loss, we’re happy to be where we’re at and we know we have to improve.

Sutter, on any extra emotion when the Kings and Blues play:
I think you get past that. We know we’ve played each other in the playoffs, but we’ve played lots of teams in the playoffs. They’ve changed. Personnel changes. … For a long time I’ve had great memories of the St. Louis Blues from playing and coaching against them at different places.