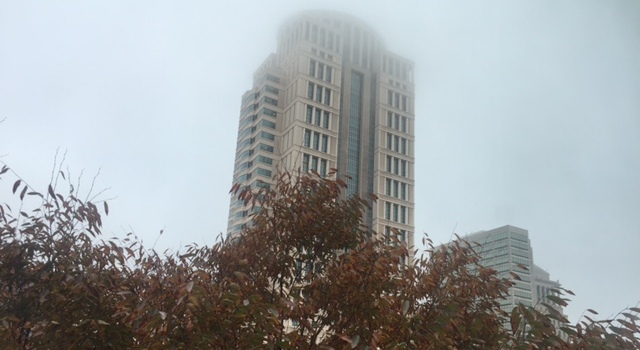 St. Louis Roulette. It’s the concerned walk down the hallways at the team hotel where we wonder whether we’ve drawn one of the dreaded rooms: the room above the flag where one deals with a cacophonous metal-on-metal sound of grommets scraping against flagpole; the room directly above the ventilation equipment where the desk loudly vibrates; the Bright Lights, Big City room where exterior lights shine inward. Fortunately, everything’s coming up blogger. Never has anyone gazed so starry-eyed upon an I-64 off-ramp.

It’s a touch cooler than expected, but like Monday’s gorgeous day in Chicago, it’s still going to be unseasonably warm in Eastern Missouri. It’s very foggy, though, and when crossing the Mississippi River early this morning, the Gateway Arch wasn’t visible behind a grey shroud of moisture.

We’re only here for 22 hours or so, so there won’t be any sightseeing (not that there usually is on business trips). But in addition to taking the elevator/pod to the top of the arch, I’ve also wanted to visit the remnants of the ancient Cahokia settlement across the river. A massive Native American city some 700 to 1,300 years ago, the grown-over remnants of the city – a UNESCO World Heritage site – contain interesting archaeological evidence that suggest it was the largest city north of what is now Mexico when reaching its population peak around 1,200 AD. Most of what remains can be viewed and experienced by climbing the roughly 100-foot high Monks Mound, which represents the modern-day remains of an earthen pyramid located at what was the center of the ancient city. See you in February, perhaps?

Back to sports! The Kings aren’t expected to hold a full-team skate this morning, but rather conduct meetings and hold off-ice workouts at the Scottrade Center. Vladimir Tarasenko is expected back in the lineup for the Blues, though Kevin Shattenkirk (lower-body), Jaden Schwartz (ankle) and Paul Stastny (foot) will be out of the lineup. Jake Allen is expected to start in goal. More to come on a game-day in St. Louis.