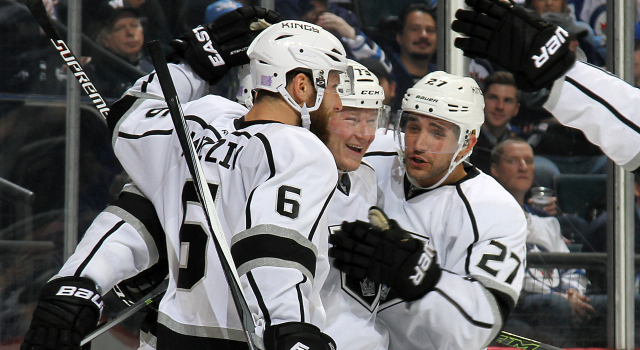 As has been stated multiple times on this space and elsewhere, the Kings have thus far been receiving encouraging returns from a defensive group occupied by younger personnel who’ve absorbed wider roles than in seasons past. While Drew Doughty remains Drew Doughty, Jake Muzzin has seen his penalty killing responsibilities grow significantly, and Alec Martinez and Brayden McNabb have thus far performed admirably as players earning more than 21 and a half minutes per night. Los Angeles’ 2.1 goals against per game is the sixth-best rate in the league; last year the Kings allowed 2.4 goals against per game. Your small sample size disclaimer still applies.

“It’s tough to just put it on us,” Muzzin said. “It starts with Quickie, and then us, and then our forwards. All of us have had a better attitude after the first three games. As opposed to ‘defend first, work hard, and then get your chances,’ before we were just trying to score goals and not work, and we were playing careless, so it’s a full focus from everyone.”

It’s a somewhat different look on Los Angeles’ back end as the defense utilizes a mix of able puck-movers with several modern, hybrid-type defenders in Doughty, Muzzin and McNabb, all of whom have a clear physical element in their games. While the Kings aren’t likely to find a regular spot atop national lists of the league’s fastest teams, the club, under Sutter, has played with a good tempo and has been successful when the defense quickly exchanges the pucks into the hands of the forwards in five-man units.

“The D have done a good job, being quick in our zone, being hard and physical on guys, and we just have to keep pounding those points,” Muzzin said. “It’s proven to be successful, so we have to continue doing that.”

With a goal, four points and a plus-seven rating during the club’s seven-game winning streak, Muzzin has practiced what he’s preaching. When asked about the evolving identity of the defense, he cited a change in personnel, if not structure.

“There’s new faces, and that may change people’s perspective on our identity, but I think we have the same mentality, the same attitude, and the same focus as previous years, and it’s been successful, and we want to continue that,” Muzzin said. “Young guys are stepping up, we want to embrace that, and continue leading that way as well.”