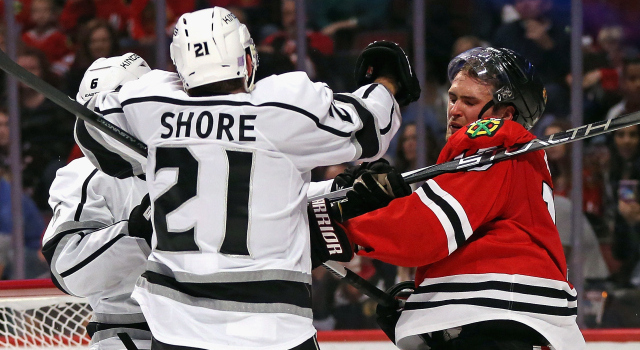 On what he saw as the difference in the game:
Our third period wasn’t that great and we had some opportunities for us to go on the power play and make the difference. [They] got a shorthanded goal and that makes a difference in a tight game like that.

On whether the game ends differently if the team gets 3-1 lead instead of a 2-1 lead:
Yeah, for sure it’d be nice to get an extra goal but we’ve been playing in a lot of those tight games and it just got away from us a little bit in the third and they buried their chances and came up with the victory in the end.

On whether it’s disappointing to have the winning streak come to an end:
Yeah, for sure but it’s an opportunity for us to start a new one. So we’ve got to look forward to tomorrow. It’s a back-to-back for us, so we’ve got to focus on getting a good start tomorrow and bring our best game to St. Louis because it’s another tough building to play in.

On whether momentum swings are more pronounced in the United Center:
Not really. Obviously the crowd gets behind them pretty good when they get going. But other than that, it’s still normal momentum as any other game.

On whether he anticipated a different Chicago team with Duncan Keith and Marian Hossa out:
I wouldn’t say that. They’re still a strong team and you saw that the guys they brought in stepped right in for them. Yeah, they’re a good hockey team.