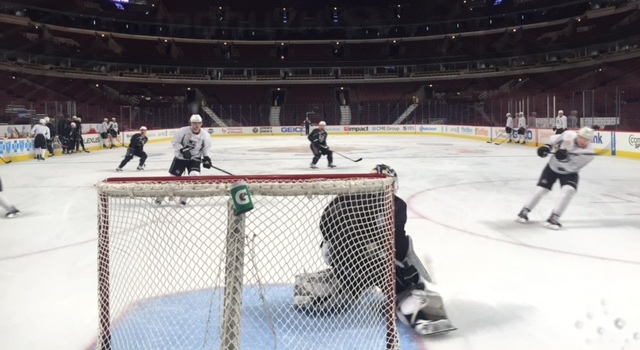 -Good afternoon from the United Center, where the Kings took part in an optional morning skate. No line rushes were held, but there were still some indications towards who will populate Darryl Sutter’s lineup card when the Kings face the Blackhawks (5:30 PT / FOX Sports West / KABC 790 / I Heart Radio) for the first of the teams’ three meetings this season.

-Jonathan Quick did not take the ice but is the presumed starter in goal. This ordinarily wouldn’t be a question against Chicago, but Los Angeles is playing in St. Louis tomorrow night, so the #LAKingsGoalieTweetOff would have applied had both goaltenders skated this morning. Enroth was among the last players to come off the ice – he stayed on a touch late with Jordan Weal – which would be an indication that the two are unlikely to be in the lineup.

-Derek Forbort, on the other hand, left the ice when the glut of players came off. That’s not an indication that he’s in – no defensemen remained on the ice for extra work – but could indicate that he’d take warm-ups and would be inserted into the lineup if another defender is unable to go. No changes will be projected to the lineup the Kings used Saturday against Nashville when the game preview hits cyberspace later this afternoon.

-Chicago made a roster move in advance of the morning skate, assigning Bryan Bickell to AHL-Rockford and recalling Marko Dano, one of the key pieces acquired from Columbus in the Brandon Saad trade. Dano, who is expected to make his Blackhawks debut tonight, was selected by the Blue Jackets with the 27th pick in the 2013 NHL Draft. Remember that pick? It was Los Angeles’ conditional selection that was ultimately sent to Columbus to complete the Jeff Carter trade after the Blue Jackets, who could have taken either the Kings’ 2012 or 2013 first round draft pick, chose the 2013 pick. Los Angeles selected Tanner Pearson 30th overall in 2012, and though they ceded the Jackets their top 2013 pick, ended up receiving a skilled and intriguing prospect in the second round by choosing Valentin Zykov 37th overall.

-As for defensive pairs, Chicago is expected to utilize Svedberg-Seabrook, Van Riemsdyk-Hjalmarsson and Daley-Gustafsson. Marian Hossa has a lower-body injury and is not expected to play, while Duncan Keith is out after undergoing knee surgery. More to come from the United Center, including some Darryl Sutter quotes shortly… 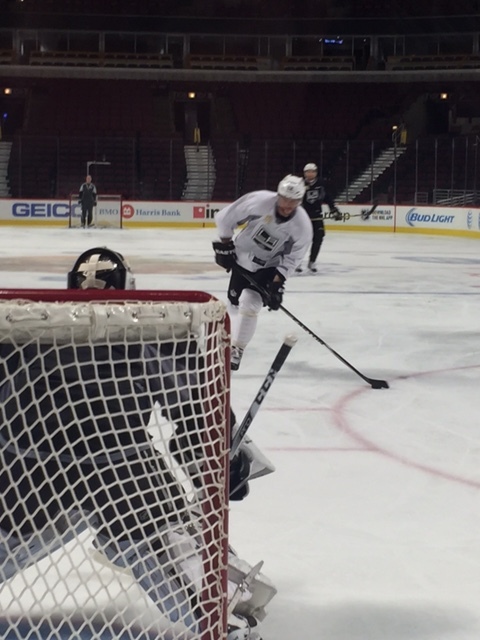