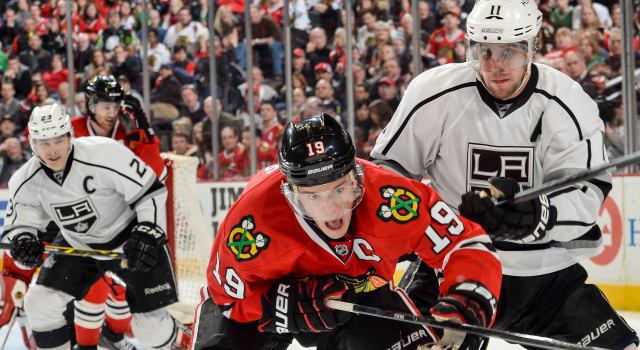 Such has been the case with the Los Angeles Kings, and in a more pronounced example, the Chicago Blackhawks. Good bye, Brandon Saad. Au revoir, Patrick Sharp. Nice to know ya, Johnny Oduya.

And so when the teams that have combined to win the last four Stanley Cups meet tonight at the United Center – Los Angeles will also host Chicago on November 28 and return to the Windy City on March 14 – there will be a pair of teams that boast championship pedigrees, and, in the case of the Blackhawks, many younger, less expensive players in the lineup.

“We’re not going to approach it any different way,” Drew Doughty said.

While a lower-body injury to Marian Hossa and Duncan Keith’s knee injury have opened the door for an even wider exposition of youth, it’s halting to look at the defending champs’ roster, which has experienced significant turnover from the spring of 2015.

Jonathan Toews will center Artemi Panarin and Ryan Garbutt. Artem Anisimov will center Teuvo Teravainen and Patrick Kane. The third line of Marko Dano, Tanner Kero and Ryan Hartman has combined for 47 career NHL games. The most familiar grouping might be the fourth line, which is centered by excellent depth forward Marcus Kruger, who’ll be flanked by Andrew Desjardins and Andrew Shaw. Defensive pairings are expected to include Viktor Svedberg-Brent Seabrook, Trevor van Riemsdyk-Niklas Hjalmarsson and Trevor Daley-Erik Gustafsson.

While there is a great deal of skill laced throughout the Blackhawks’ lineup, only seven players – Hjalmarsson, Kane, Kruger, Seabrook, Shaw, Toews and goaltender Corey Crawford – who represented Chicago in Game 7 of the epic 2014 Western Conference Final are expected to appear in tonight’s game.

“It seems like Chicago, ever since they won their first Cup, they’ve been having to change their lineup year-in and year-out. They always seem to figure out a way to be a great team and make the Stanley Cup Final and win the Stanley Cup Final, and that comes from their leadership, obviously,” Doughty said. “I think Toews is right there as one of the one, two, three best players in the world, and his leadership, I know, from experience, is phenomenal, so when guys come in, and they watch what Toews does on and off the ice, it’s hard for it not to be contagious, so I expect all of these young guys to be good players, and they’ve won those three Stanley Cups because they have depth, so they’re going to be a good team.”

That’s well put from a 2010 and 2014 gold medal-winning teammate of the Blackhawks’ star center. Opinions from the Kings’ room seem to indicate that while names and faces may have changed, the culture and identity remains strongly intact.

“They’ve been good at home this year, and … [have] new faces but probably the same attitude and same game plan,” Jake Muzzin said. “Young guys stepping up – they’ve got a lot of young, skilled guys over there – and some new faces on D, but they’re going to have the same attitude and same mentality they’ve had before, so it’s going to be a tough test, and we’re going to have to be on our best game to win.”