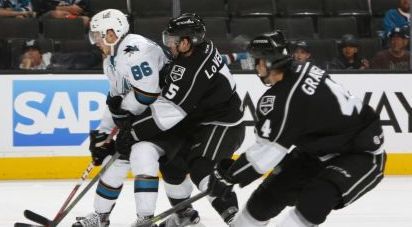 After every Reign away game we’ll try to catch up with Reign head coach Mike Stothers to get his take on things. This is the first of its kind for this post. There will also be a brief rundown of what you missed with the team on the road. So here we go …

Barracuda 4, Reign 2
The Reign dropped their third straight game, this one in regulation, of their three games in three days adventure. San Jose opened up the scoring just 2:45 in on a goal by Patrick McNally. The Reign evened things on a power play goal by Michael Mersch off a cross-ice feed from Sean Backman midway through the first. The teams traded goals again in the second period, with the Barracuda’s Mirco Mueller scoring right off the faceoff on a power play chance, just four seconds after Reign captain Vincent LoVerde was whistled for holding. But the Reign bounced back, with Ryan Horvat picking up his first of the season, a backhander less than a minute after San Jose took the lead. In the third, the pace was altered as both sides marched to the penalty box (7 times total). San Jose’s game-winner came with 3:45 left was a spectacular individual effort by Jeremy Langlois on a wraparound attempt (video below). An empty-netter by Nikolay Goldobin with 59 seconds left.

Question: Overall thoughts on the three games in three days? The grind and how it played into tonight.
Stothers: Overall I thought we played well and deserved more than the two points we ended up with. That’s how it goes sometimes, this is a tough league, better than people give it credit for. So points are going to be hard to come by. Their coach (Roy Sommer) complimented our team’s work ethic after the game, especially after 3 in 3 days. He didn’t have to say that if he didn’t mean it, or we didn’t deserve it. That is a great compliment and recognition to our players. I am very proud of their effort and commitment.

Question: What was the difference tonight? Third period looked tough to set rhythm with all the penalties for both sides.
Stothers: Great game and energy until the Refs got involved then everything slowed down to a snail’s pace. Again that’s life in the American Hockey League. We are a development league for NHL Players and also a development league for the Officials. I am not going to say they are right all the time nor am I going to say are wrong all the time. That would be an excuse, we lost the game and we move on to the next one. It was a good game for a third game in a row.

Question: What do you take away from the weekend in terms of what aspects the team needs to work on, especially going into a good team Thursday in San Diego?
Stothers: We are always looking to improve, in all areas as individuals, and as a team. So we use the day tomorrow as a recovery day and get back on the ice Tuesday morning. We will work on our systems, and execution, thru repetition more so than conditioning. Stress the importance of bearing down and being puck ready on scoring opportunities. We generated a lot of shots this weekend but not enough goals. We expect everyone in our line up to contribute not just one or two guys. Net front presence is important but we also have to have layers at the net, and not missing the net on golden opportunities or shots blocked because we take to long on the release.