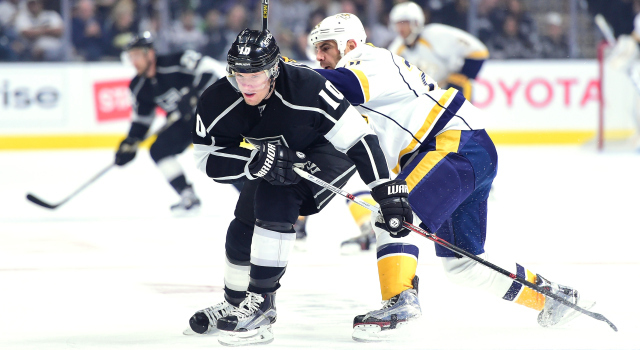 At the 18:53 mark of the second period of Los Angeles’ 4-3 overtime win over Nashville, Predators forward Mike Ribeiro was penalized for a boarding minor on this play against the Kings’ Christian Ehrhoff:

That’s a bad hit. During the entire retrieval, from the blue line to the contact, Ribeiro saw only numbers after he chipped the puck deep. Ehrhoff didn’t return because of what was announced in the press box as an “upper-body injury” but was seen leaving the Kings’ dressing room after the game.

Darryl Sutter was asked about Ehrhoff after the game and replied, “I think he’s fine, but I’m not into answering that or talking about it.”

Though it is unclear what type of upper-body injury kept Ehrhoff out of the game, the veteran defenseman dealt with two concussions last season but was fully healthy when joining the Kings.