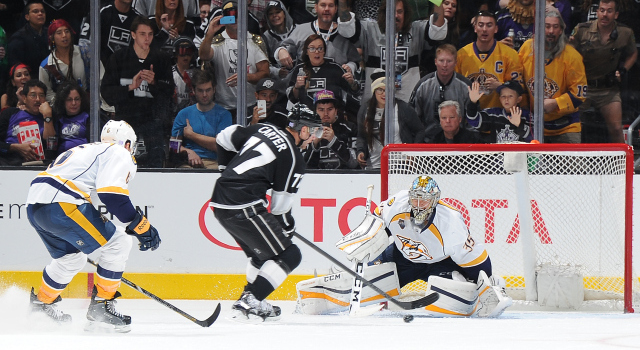 Drew Doughty, on the team’s confidence:
We’re playing with a lot of confidence. Obviously we can’t let it get too far up into our heads because when we’re playing confident like this and at the same time still trying to do all the right things, we’re winning games, and we need to continue winning.

Doughty, on the final play of the game:
We work on two-on-ones, three-on-ones every day in practice and as defensemen we take a lot of pride in breaking those kind of things up. I was just fortunate to get a stick on it, and I knew it was a three-on-one, so that meant the whole ice was clear up ahead of me, and that was easier to find Carts. [Reporter: And once you saw Carter go with it, were you pretty confident he was going to get that goal?] Yeah, obviously Carts is one of the best goal scorers on our team and in the league. Him scoring that goal was huge for our team, and we expect him to do those things.

Doughty, on the team’s resilience:
Yeah, I thought we had some really good moments throughout this game. I think it was the second period we maybe had a few lackadaisical moments and took penalties – they scored goals on those. Even though we had to come from behind that way, we just never gave up and we always knew we had a good chance of winning this game. They’re a good team and a good match-up for us, and we’re just happy we won it.

Doughty, on whether he likes three-on-three overtime:
Yeah, I think it’s pretty cool. I don’t want it to go to shootouts. Shootouts, as much as it’s a skill play in hockey and a penalty shot happens every once in a while, it’s not really a part of hockey. I guess some people could say the same for three-on-three, but I feel like that’s more a part of hockey than a penalty shootout is. [Reporter: Is it kind of pure, like you’re playing like a kid in the driveway or in the street or something?] I don’t know, everyone wants to kind of bring that up and say that stuff, but when you’re out there, you know there’s only three of you, so one mistake usually turns into a goal the other way. As much as it’s fun being out there three-on-three, it’s definitely a little nerve-wracking at the same time. [Reporter: Is it exhausting?] Oh yeah, it’s exhausting. I guess maybe not for the forwards so much, because the forwards are used to having to go end-to-end and forecheck, backcheck, all that stuff, as a D-man, you’re used to basically just going up to the blue line and then playing defense. Having to be down there below the goal line is tough for a D-man. [Reporter: What does that say about Jeff and acceleration at that stage? He had to right himself and then took off.] Really, he had the whole ice in front of him. The slowest guy on our team I still think would’ve gotten that breakaway, but he made the read. It’s either going to be a goal going at our net three-on-one [or an odd-man break the other way.] He made the read to stay up there, and that’s a perfect read, and if someone can break it up or we can make a save, get it up to him, that’s what’s going to happen.

Jeff Carter, on seeing Drew Doughty blocking a key pass to set up the final play:
I mean, I was turning and going. That was my first thought. Drew’s a smart player. He knows it’s a three-on-two, so you know someone’s back deep, so it was a good play by him to get it right up. [Reporter: Is that how crazy three-on-three is going to be – just one change of possession, and off you go?] Yeah, you get a break, you turn the puck over, you don’t score, you don’t hit the net, it’s going right back the other way. It’s definitely exciting. The building got rocking. It’s a lot of fun for us. A little nerve-wracking, but it’s fun. [Reporter: All things considered, do you like it better than four-on-four?] It’s totally different. It opens it up, for sure. I think the league got what they were looking for with trying to reduce the number of shootouts and whatnot. I mean, it’s been exciting. You can see the fans are right into it, it’s back-and-forth, and me, personally, I like it.

Carter, on strategizing for three-on-three overtime:
I think you have to a little bit. It’s new for everybody. There’s a lot of ice out there. You can’t make too many mistakes, or it’s going be in your net. [Reporter: It seems like faceoffs are really important, too, because you can take it from the other team, keep it, you score, and they never touched it.] Yeah, puck possession’s huge. You win that first draw, even if you need to get a change, one D just skates it back or you throw it back to your goalie or whatever. I mean, you really don’t have to ever dump the puck in or give it back unless you turn it over.

Carter, on whether he had made his mind up to let Pekka Rinne make the first move:
I couldn’t tell you.

Carter, on Tyler Toffoli:
He bears down on his opportunities. He works hard to get ‘em. The first one was a great pass by Hoff, and maybe one that Pekka would like to have back, but the second one, the end of a PK, we were out there for a while and Lewie makes a great play. Both of us didn’t really have too much left in the tank, but Toffee, he saw him. He beared down and got down there as quick as he could. You drive the net like that with your stick on the ice, you’re going to get rewarded. He’s putting the puck in the net, but he’s working for everything that he’s getting, so it’s been good.

Andy Andreoff, on the team battling from behind to win:
I think it was just relentless for us. We were down 2-1 and we had a really nice kill. You could just feel the energy after that nice play by Lewis to Toffoli there. You could feel that energy on the bench that we were going to come back and bear down on this one and get the seventh straight win.

Andreoff, on his goal:
I knew Muzz was going to try and get a shot on net, but he didn’t have a clear lane, so I kind of figured it would get it off the pad, so I kind of waited on the outside, and it came out right to me, and it was perfect.

Andreoff, on winning seven straight games:
It’s obviously in the back of your head, but you just take it day-by-day. Just being ready for the next game and not worry about winning streaks or how many game-streaks you’re on. So hopefully we just keep this winning streak going.

Andreoff, on the offensive show by two defensive-minded teams:
I guess it was just the way the penalties and power plays, the momentum and everything was changing. Toffoli has been scoring a lot, and I’m sure a couple guys on the other team have been doing really well, so I guess it just turned into an offensive game, and once we were good in the D-zone, the transition turns it into the O-zone, so I thought we did a pretty good job of that.

Andreoff, on the key to embarking on a winning streak:
I think just being defensive, being really strong in our defensive zone. The transition creates offensive chances. The power play, penalty kill, just making sure special teams is really good. Those are key things that we have to be ready for.