Pearson on lines, rhythms during streak 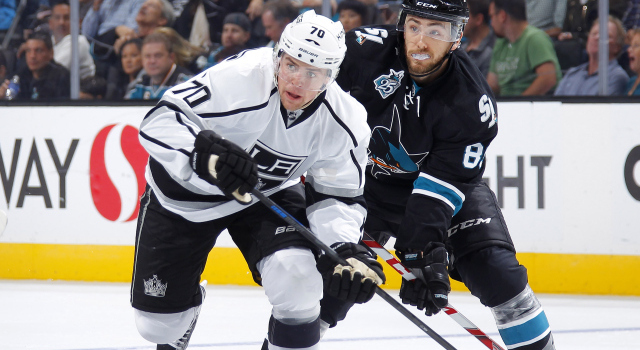 Tanner Pearson, on any disruptions when changing lines mid-game:
No, I mean you guys know how it goes. If you’re not up to par, he’s going to switch something up. That’s what kind of happened. I played with the kind of guy I played with before, so it wasn’t really a big change.

Pearson, on whether he changes his game depending upon who his center is:
No, I think just the kind of thing you’re aware of is if you’re passing to a lefty or a righty. So that was kind of the change for me going up with Kop. But other than that, it was kind of an easy transition.

Pearson, on whether the team is concerned that most scoring has come from one line:
Not really, you try to go at it kind of the same thing every game. Obviously that one line is rolling right now and it’s key for us for them to keep on going, we’ve just got to get some scoring chances from other lines and contribute on it.

Pearson, on whether time off between games is detrimental while on a streak:
Yeah, I think the whole month was kind of weird with a couple games with three days in between. You just have to stay focused. Obviously when you get away from the rink, you take care of yourself and that kind of thing and then come back to the rink ready to go.

Pearson, on what led to every line contributing against Winnipeg:
That was one of the key things, especially with playing a team like Winnipeg that’s kind of like us, a big, heavy team that plays a fast game. We knew that they were going to come out in the first as hard as they always do and just kind of had to ride that out and keep pushing and keep pushing and eventually we got the win.

Pearson, on the team playing in sync:
I think that’s what we have to be game in and game out. I think that was a good stepping [stone] for our team all playing the same way. I think it’s going to help us out in the long run.