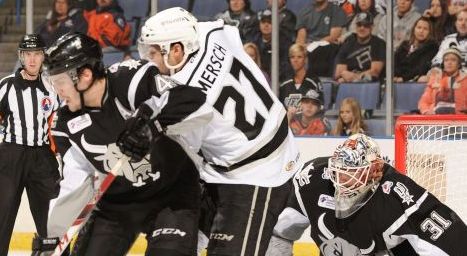 Head coach Mike Stothers, on the game overall:
I thought we played well again today. You know what we didn’t win in the 3on3 last night, we didn’t win on the 3on3 tonight, but you know what? You can’t dwell on it, you can be whatever you want but I prefer to be positive. We battled a good goaltender, we scored late, pulled the goalie scored late to tie it up, we got another valuable point. You know what, if we can continue to find ways to generate some points, you know what, at the end of the season that’s what you’re looking for and that’s total points.

Stothers, on whether the team was getting frustrated:
I don’t think we get frustrated with anything, you know what, guys playing well and we’re getting plenty of opportunities. Now if we weren’t getting plenty of opportunities that might get you a little frustrated but we were getting lots of good looks. There were times there where we had them on their heels, so you know what, again, I can’t stress it enough. There’s going to be times during the course of the year where you’re playing well and you’re not getting the victories. I can think of being down three to Bakersfield and we came back and won. We probably shouldn’t have won that one. You know what, we don’t dwell on those little things.

Stothers, on roster changes (Raine in for Ebert, Arnold for Miller and Budaj for Emery):
We have bodies and we’ve got three games in two and a half days and everbody is quite capable of playing so you try to keep everybody as busy as you can.

Stothers, on energy in first period after giving up early goal:
You get scored on and again, you guys [media] can say you get demoralized or you get discouraged or you get frustrated but we just go right back to work. I think we outshot them 21-3 or something, again, I liked it.

Stothers, on his 3-on-3 OT philosophy:
It pretty much is (a free-for-all). You want to have possessions of the puck and sometimes it can help you and sometimes it can hurt you but you’re certainly not going to dump it in. Sometimes you have to pull it back out of the zone so you can get the changes that you want. The problem is you do get extended out there. The mentality sometimes is, 3-on-3, I think I can score here, and maybe you stay out a little bit longer than you should. It’s much the same as the penalty kill. You’ve got to go hard, short, fast, change when you can and, you know what, I think it’s been fun. I think it’s been exciting. The result hasn’t been in our favor but I’m still not saying well it’s no darn good, let’s go back to whatever, which I guess next comes the shootout. Not a fan of that. I’d much rather see games decided 3-on-3.

Stothers, on Emery’s play:
It’s tough for him. He goes in and I think it was the first shot he saw went in. Again, he relies on his NHL experience and his veteran presence and you look up at the clock and you’ve got 49-plus minutes to go. It’s not that big of a deal, just keep marching on.

Stothers, on whether he coaches differently on a back-to-back-to-back
You try to utilize your whole bench. I think we did a pretty good job today of getting everybody on the ice and trying to use all four lines and all six D. There’s sometimes you might have an offensive zone faceoff, you might want to get certain guys out or even a defensive zone faceoff. I haven’t actually looked at the minute but I think it should be pretty well spread out.

Stothers, on what was missing today:
Just didn’t find the back of the net, that’s all. If I’m going to nitpick that’s all I can say. Again, we had some chances so, no, I’m gonna nitpick.

Nic Dowd, on Pickard:
Hats off to Pickard. He played really well and made some good saves. I thought our power play was OK, but 5-on-5 I thought we were good. We had 30-40 shots so for him to let up one goal, I think he played well but at the same time every good team’s got to find a way to score. We’ll find it from somewhere – backend, frontend, whatever.

Dowd, on playing from behind:
I think any team with a one-goal lead, ours included, is obviously going to pack it in a little bit more and make it harder to get shots through and it also causes more havoc in front of the net and it’s harder to get rebounds because there’s more bodies in there. But finally towards the end we got one through and it went in. Like we were saying on the bench we just had to continue to stick with what we were doing and we found one.

Dowd, on the progression of his game this season:
I think I got off to a bit of a slow start and just because of myself really. I’ve been playing with good linemates this whole time. Mersch and Zykov are finding their way too, and I think it’s a learning curve for everybody no matter how long you’ve been in the league. I think we’re starting to figure each other out a bit more and line chemistry makes a big difference and I know that I’ve got to get the puck to Merschy down low because he’s good from the goal line to the crease. Z likes to shoot the puck and I like to pass so we’re starting to figure it out a bit more. And just playing more games, more games, you get more ice time and I’ve been fortunate where I’ve been getting to play a lot of minutes, power play and stuff, and I think that’s going to help anybody’s game.

Dowd, on staying upbeat despite back-to-back OT losses:
It’s a long season and we get two points tomorrow we take four out of six points for the weekend, that’s a pretty good weekend. I think it’s going to be a tough game tomorrow but I thought we played really well today. We had 40-something shots and we scored one goal with under a minute left in the game. The 3-on-3 overtime, it is what it is, you go from almost scoring a goal to – we almost had a couple chances – I make a bad play and the puck goes the other way and it’s in the back of our net. It’s just how it goes with this overtime, nothing to hang our heads about. I think we did a lot of good things today and I think losing a doing a lot of good things is way better than losing and doing a lot of bad things.

Derek Forbort, on if he’s going to San Jose or back with Kings:
I think I’m traveling.

Forbort, on playing with Gravel:
We have really good chemistry out there and it’s fun playing with him. I just sucks that we haven’t got the wins the last two. I feel bad coming down and 0-2.

Forbort, on his progression to game shape:
Good. It’s fun playing the heavy minutes and I feel like I’m back.

Kevin Gravel, on the back-to-back-to-back:
We do that a lot in the American League, especially last year we had a lot of 3 in 3, so I think guys for the most part are kind of used to a quick turnaround. I think guys too are a little anxious especially after a loss last night in overtime just to get back at it, not a whole lot of time to think about it. Go to bed, wake up and come right to the rink and play a game. I think it was good. I don’t think guys really had a whole lot of carryover. We had a pretty good first period, so it was good.

Gravel, on battling back to get a point:
No matter when we get scored on, the one thing Stuts preaches is that we stay even-keel. We score a goal, we get scored on, ya know, nothing changes. Especially when they score 20 seconds into the game. You still have the entire game to come back and we needed every second of that tonight. But eventually we did come back and fought out a point there. Obviously you’re looking to get that second point, but a point’s a point. It could come down at the end of the year you’re a point out of it or you’re a point into it so every point matters.

Gravel, on frustration in the third:
You try your best not to let it creep in. We had a couple power plays, maybe more frustration ief we weren’t getting our chances but we were getting our chances. If your chances are coming then you dot really have worry, you start worrying when you’re not getting your opportunities and we had a lot of scoring chances throughout the game and their goalie played really well. SO you’ve got to tip your cap to him. But we just kept grinding and we were able pop one in there in the last minute.

Gravel, on his goal:
Nothing special really. We kind of just chipped the puck in and ended up setting it up a little bit. Backs made a really nice play, got the puck to me up top and I just kind of tried to get it through and I don’t think he saw it and it went it. And that’s what it takes, you’re not going to get a pretty goal every time.

Gravel, on playing again tomorrow:
The guys are upbeat in there, we’re happy with the way we played tonight. We’ve got a long bus ride tonight but come tomorrow it’s a new day. We’ve got another game against San Jose. Played them last week so we kind of know what they’re about so we’ve just got to be ready come puck drop tomorrow.