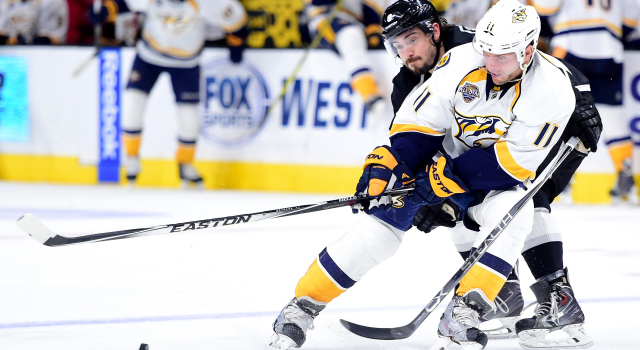 Peter Laviolette, on whether it was as close a game he anticipated:
Well, I mean both teams have good goaltending. They’re able to generate a lot of offense. It went back and forth it seemed to me. They had their moments. We had our moments and it went to three-on-three.

Laviolette, on Mike Ribeiro’s boarding penalty on Christian Ehrhoff:
It was tough. Ribby is going in on the forecheck there, but I understand why the call is made. The numbers are showing, but it’s tough when we want our guys to be aggressive on the forecheck.

Laviolette, on whether he considered challenging Tyler Toffoli’s second goal:
No, the puck was already in the net.

Laviolette, on what he has learned about changing lines during three-on-three overtime:
There wasn’t a whole lot of that that could happen. The minute you lost possession in the offensive zone, it was a sprint the other way. I mean there was probably three or four odd-man rushes – two for them, two for us. They were able to capitalize on the last one.

Laviolette, on the momentum swings throughout the game:
Like I said, both teams are playing really well right now. They had their moments, we had ours. We didn’t expect to come in here and play our game for 60 minutes. We knew we were going to have to defend at times and we made them do the same thing. So it was a good game.

Seth Jones, on whether the game was the defensive battle he anticipated:
Obviously it’s going to be a tight game. They’re a big, strong team and we knew it was going to be a physical battle and it’d be a close game throughout. Neither team really had many scoring chances. I thought we played a pretty solid game. We battled all night. They’re a good team. They’re hot right now. They’ve now won seven in a row. So we knew we’d have our hands full, but I thought we played a pretty good game.

Jones, on what allowed Los Angeles to score two goals in the third period:
We lost coverage maybe on that second goal, I don’t know if it was the third goal or not. The other one off the end of the power play, I just tried to stay on the puck and it just kind of took a weird bounce. They got a two-on-one and they made a good play. So they capitalized on their chances.

Jones, on whether his style of play changed with the lack of room on the ice:
Like I said, both teams were physical tonight. Every time you touched the puck you were getting hit. Whether you had it or you didn’t, somebody was putting a body on you. I think maybe just keep it simple. Even myself, a couple times there in the D-zone trying to make plays to the middle. That’s something that we’re trying to eliminate. It just leads to chances against.

Pekka Rinne, on whether he felt he was interfered with on Tyler Toffoli’s second goal:
I never knew when the puck crossed the line. So I didn’t really complain about it. He came into the net hard and I guess he got his stick on it and it went in. I’m not going to complain about that.