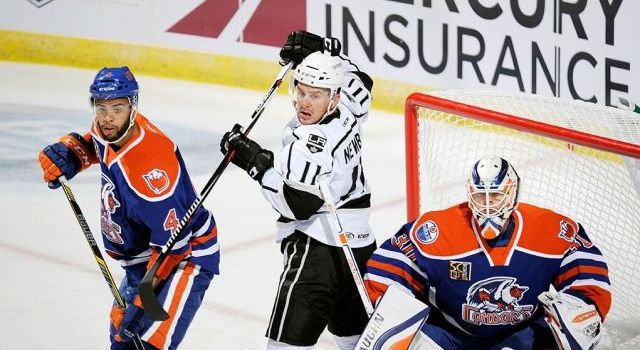 Some notes from today’s 10 a.m. practice at CBBA. Lots going on for the Reign today as they get set to continue their homestand on Friday against San Antonio.

–Center Kris Newbury has a broken left foot and will be out 4-6 weeks after taking a puck to the skate last Friday against Bakersfield. You may remember that Newbury played through that game (and told me afterward that it was a “little sore”) but he still skated the next day vs. San Jose. “Kudos to him for being able to gut that out,” head coach Mike Stothers said about Newbury playing through the pain. Stothers called this “a big loss” and said six weeks was probably more the reality in terms of the length Newbury will be out. Newbury leads the team with six points through five games (3 goals, 3 assists). In Newbury’s absence, Adrian Kempe will move to the middle. “The way he skates, he should be able to handle the extra load. It’s hard to be a centerman, the way we play, but his skating should allow him to do so.” Stothers said Kempe will center Sean Backman and Justin Auger to start, but as has been the case early this season, changes could come at any time.

–Defenseman Derek Forbort was sent down by the Kings this morning and was on the ice with the Reign. Stothers said he hasn’t put much thought into who he will pair the 6-foot-4 blueliner with against San Antonio. “We were just glad to see him walk through the door here this morning for practice and we’ll kind of reevaluate tomorrow morning. Life in the American Hockey League. I don’t plan that far ahead because just as soon as he gets here somebody could get recalled, somebody gets sick, somebody whatever. We know he’s here and we know he’s available to us and we know he’s gonna play and how it shakes itself out we’ll know more tomorrow. It was nice to see him, we know what Forbort can do. He’s steady, he’s reliable and I think it just makes us a little stronger on the back end.” Forbort had missed some time with the Kings with the flu. “Better,” Forbort said when asked how he was feeling. “Feel like I have my strength back now and excited to play some games.” Forbort has played in two games this season with the Kings, but not since Oct. 18 vs. the Avalanche. Here’s what he wants to get out of this weekend: “Just get my game conditioning back. I want to go out there and play my game. I don’t want to change anything up, be hard to play against, make simple plays and be effective out there.”
Get all the details of his assignment here from LA Kings Insider Jon Rosen.

–Forward Joel Lowry practiced in a jersey that was not red, signifying that he’s finally been cleared for contact from his upper-body injury. He saw doctors on Wednesday on got the green light then. “It was great,” Lowry said about Thursday’s practice. “It felt nice to finally be able to do a little more and obviously get into all the drills was good. I felt pretty good out there so that was a good sign.” Coach Stothers said Lowry will not play this weekend and now “it’s a matter of seeing how he responds to the battle aspect of practice … there’s gonna be an adjustment for him, maybe fatigue so we’ll give Joel every opportunity to make sure he’s without a doubt 100 percent, so I think there’s a strong possibility we’ll see him Thursday.” The Reign host the San Diego Gulls next Thursday at 7 p.m.

–Ray Emery is slated to make his debut with the Reign on Saturday against San Antonio. The team has a back-to-back-to-back this Friday-Sunday, hosting San Antonio the first two days before an away game Sunday afternoon against San Jose. Stothers has gone with Peter Budaj through the first five games and will give Budaj the net again Friday before giving way to Emery. “Ray’s been a good solider,” Stothers said. “He’s put in a lot of time and a lot of hard work. He’s been a good team guy. He’s an NHL-caliber goalie so the thought process at the start was that he needed to get caught up to speed because he missed a lot of time before he arrived here. Now, he’s been able to practice with us so we feel good, feel good going into the weekend.”

–Paul Bissonnette (lower-body injury) was seen skating by himself once practice was over.