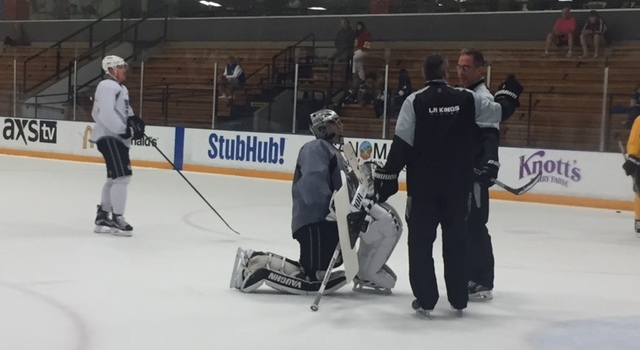 -Jonathan Quick was the first goaltender to leave the ice. Tomorrow’s game is an afternoon affair against Nashville (1:00 p.m. / FOX Sports West / KABC 790 / I Heart Radio), and the #LAKingsGoalieTweetOff applies to practices on the day before afternoon games.

-Matt Greene has been skating while working back from an upper-body injury; on Friday, he was an active participant in practice. “A few days ago I started to feel better and I’m just getting stronger now and I’m trying to get ready to be at 100-percent pretty soon here, hopefully,” he said.

-The lines were adjusted back to those seen in the Edmonton game and for the outset of the Winnipeg game, which meant that Tanner Pearson skated opposite Dustin Brown on Anze Kopitar’s line. “You guys know how it goes,” Pearson said after practice. “If you’re not up to par, he’s going to switch something up. That’s what kind of happened. I played with the kind of guy I played with before, so it wasn’t really a big change.”

-Many dogs were on hand at the facility as part of a players/dogs calendar photoshoot, which is part of Kings Care’s first ever pet calendar. More details to come!

-I’ll be at the Reign game tonight against San Antonio. If you’re around the press box, say hello!

-Thank you for your patience during this site’s redesign, which is mostly aesthetic and nearly complete.. More stories to come!