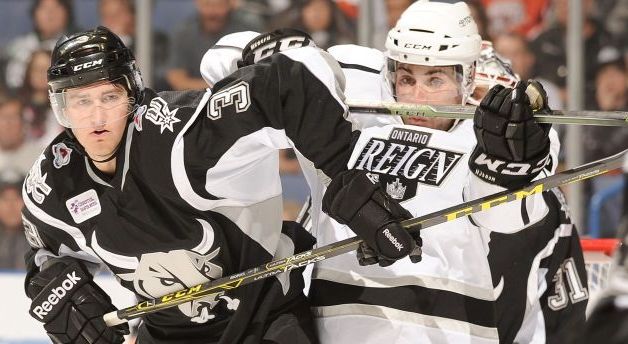 Stothers, on Kurtis MacDermid:
I see an extremely large man who can get around the ice pretty well. You know what, he’s making some plays for us, he’s definitely a tough individual but he’s working on all aspects of his game and I think that’s important. The big thing in hockey now is size and he does bring that and I think he can play. We know how tough he is, we just want to make sure Kurtis is playing, and playing well and making plays to be a hockey player not, not just a guy who is a physical presence.

Stothers, on Derek Forbort:
He comes downs from the Kings, so he’s not coming here to sit on the bench. If he’s doing that then I’m not talking to you after the game. You put him on the ice, that’s just the way it is. He’s been up there, he’s earned the right to play with the Kings. It’s been tough for him to get in the lineup and he’s with us here for however long and then I’m sure he’ll be going back up to the big club and helping them out.

Stothers, on the battle the team had after falling behind in the third:
You can very easily get discouraged and we don’t. We’re trying to instill the same type of demeanor that we had last year. Again, we don’t get too pumped up with wins, we don’t get too pumped up when we score and we don’t get discouraged when we get scored upon. Stay even-keeled, stay focused and you know what, there was still a lot of hockey to be played, there was still 10 minutes I believe, of hockey. We’re confident in our abilities to battle and that’s part of it. When things are going good it’s easy, but you know what, when you’ve got some adversity it’s how you dig in and I was real proud of our guys, I thought they did a great job.

Stothers, on Peter Budaj’s goaltending:
Buds has been great. You can see why he’s had the career that he’s had, he’s been very reliable. He just settles things down there for us. Comes up with the big saves when he needs to and we try to pride ourselves on not giving up a whole lot of opportunities but we know when he’s there he’s going to make the save for us. Having said that, Ray [Emery] is going in for us tomorrow and we know he’s going to do a good job for us tomorrow as well. So we feel real good with our goaltending.

Sean Backman, on 3-on-3 overtime and his chances:
There’s a lot of room to skate out there when there’s only three guys out there, but a couple good tries and unfortunately we came up on the short end of things tonight.

Backman, on how the team can bounce back:
It helps that the game’s tomorrow. You don’t have to think about it for that long, you get another crack at it 3 o’clock tomorrow afternoon. It also helps that we’re playing the same team, so we get a little revenge tomorrow and hopefully we can get a win.

Backman, on the Rampage:
They’re a good skating team. They’ve got some guys who can score up front but then again so are we. I think they are a good matchup for us because we are similar hockey teams with guys who can move the puck and skate so it should be a good game tomorrow again.

Backman, on the play of Rampage goalie Calvin Pickard:
We want do to our best to make it as hard as possible for him and he’s a good goaltender and there’s a lot of good goaltenders in this league and we’re just going to have to do a better job at getting pucks at him and creating traffic and making it tougher the next game.

Adrian Kempe, on his move to center:
It was good I think, I’ve played center before and think I’m a pretty good center. I like to come low with my speed and carry the puck through the neutral zone. It was bit weird in the beginning … but I think I got into it.

Kempe, on how the team can bounce back:
They’re a good team, it was a tight game the whole game so I just think we need to keep doing what we are doing and keep shooting the puck and probably get more goals tomorrow.

Justin Auger, on the overtime loss:
I thought we played well. Guys battled hard, and we were glad to get it in overtime with the late one. It sucks we didn’t come away with the two points, but of course we’re happy with one.

Auger, on the new looks with Kris Newbury’s absence:
It just gives other players a chance to step up – young guys like Brodz and Zykov and those guys who sometimes might not be playing late in a game. We look to them more late in a game to step up when those guys are out.

Auger, on whether Mike Stothers’ approach has changed:
No, not really. Stuttsy’s always been one to expect a lot out of us. He expects us to work hard, no matter what.

Auger, on his game-tying goal:
I was just standing in front. Obviously that’s where Stuttsy likes me, and I saw the puck between my legs and just whacked at it, and luckily it snuck in through his five-hole. [Reporter: With your size and your skill set, is that something that you continually through junior, through professional hockey, reinforce those types of similar plays?] Yeah, of course. Being a big guy you’re expected to be in front of the net a lot, especially on the power play and getting in front of the goalie and blocking his vision and stuff. That’s what Stuttsy expects of me, so getting a goal like that puts me out there out there more and [gives me] more confidence, and he’s going to want me in that position more when I’m putting them in the net.

Auger, on the expansion of his roles in his second full professional season:
Yeah, getting a lot more power play, penalty kill time – that’s a big thing. I wanted to be leaned on more as an older guy this year than last year. Obviously we lost a lot of our core guys, and being one of the returning players, I like to be looked on being put out there late in a game in a key situation when we need a goal and stuff. I’m just trying to carry that over, game-in and game-out.

Auger, on the Rampage:
They’re a big, physical team, and we’ve just got to come out and compete every shift against them. We knew they’d come out hard. Like I said, I thought we played great. We just didn’t end up with the two points.

Derek Forbort, on making his Ontario Reign debut:
It was definitely fun getting back in the lineup and playing and getting back with these guys and going out there and competing. It wasn’t that big of an adjustment, really. I just wanted to go out there and play my game.

Forbort, on playing alongside Kevin Gravel:
I really like playing with him. I thought we have good chemistry. They kind of call us the twins back there. We kind of play the same style of game and we’re able to read off each other pretty well because of that. [Reporter: A little bit of a different game, though, as well. You’re playing more of a defensive role at times, and he seems to have gotten the offensive bug over the last 18 months. Is that good for you guys that way?] Yeah, I mean, whether he plays offensive or not, I think we complement each other pretty well.

Forbort, on whether anything came smoother after gaining NHL experience:
No, I mean I try to be as consistent as possible with every game that I play – just the same preparation, the same mindset, no matter what level I’m playing at.

Forbort, on anything specific Darryl Sutter told him before joining the Reign:
Nothing really. Just go down and compete. Work hard. [Reporter: John Stevens, anything?] Just kind of that same thing. Just be firm in my plays, and hopefully I’ll get back up.

Forbort, on whether he dealt with any “rust”:
No, not really. I mean, up in LA they did a good job getting me back into shape after being sick, so I felt pretty good out there.