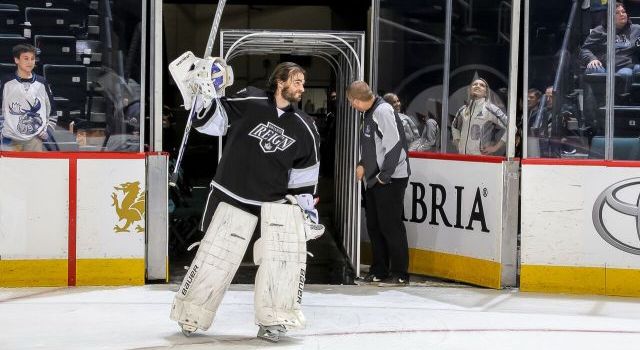 –With the loss of center and points leader Kris Newbury to a broken foot, head coach Mike Stothers said Thursday he’s moving Adrian Kempe off the wing to instead center Sean Backman and Justin Auger. “The loss of Newbs hopefully doesn’t affect us too much because we try not to rely on any one guy,” Stothers said Thursday. “It’s good opportunity for other guys to step up.” The other top forward line will continue to feature Nic Dowd centering Michael Mersch and Valentin Zykov. Stothers has been prone to shaking up the forward lines throughout games, so don’t be surprised if they’re adjusted tonight as well.

–Goalie Peter Budaj is expected to be between the pipes for this contest for what will be his sixth straight start. He leads the AHL in wins (5) and shutouts (3). … Defenseman Derek Forbort, who started this season with the Kings, will be on the blue line after being sent down on Thursday morning.

–The Rampage are second in the Pacific Division, trailing only the Reign. They’re the only other AHL than the Reign to have not lost in regulation this season. The Rampage are third in the AHL in power play percentage (30.0%) while the Reign’s penalty is second in the league (96.2%), surrendering just one goal. “They have been playing well. Their goalie (Calvin) Pickard, I’m familiar with him from the Western Hockey League and I know how good he is, he has some very impressive numbers,” Stothers said Thursday. “They’re a team that’s not giving up a whole lot. They’ve got a good mix of size and speed and they’re finding ways to put the puck in the next. I think it’s a great matchup and I’m exciting to see two good teams going at it and hopefully we can keep playing like we have been which is as a team.”

–Here’s a nice video report from their broadcaster Dan Weiss, where you can get a look at how the team is doing so far and hear from some of the players.

–One name that will look familiar to Kings fans is center Marc-Andre Cliché. The Kings acquired him in 2007 in the trade that sent Sean Avery to the Rangers. Cliché has spent most of his career in the AHL, most of it with the Manchester Monarchs. Cliché has 1 goal and 2 assists this season.