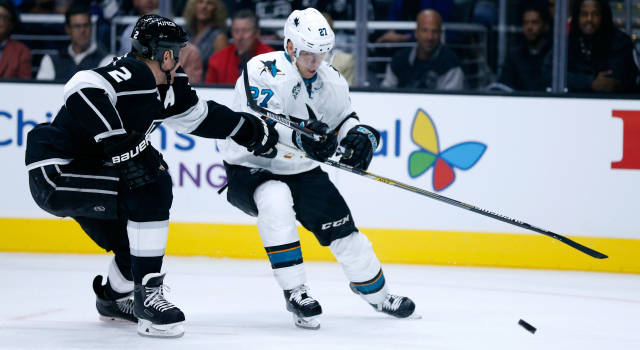 Having skated in limited capacities during the rehabilitation of his upper-body injury, Matt Greene practiced with the Kings Friday afternoon in advance of the club’s game against the Nashville Predators on Saturday (1:00 p.m. / FOX Sports West / KABC 790 / I Heart Radio).

“I feel good,” Greene said. “I’m getting better. That’s about it. That’s all I really have.”

He had a little bit more to offer than that and understands that the ongoing process to rejoin the team could be nearing its completion date. Greene suffered an upper-body injury during a preseason win over the Colorado Avalanche on September 27, and though he returned to appear in the first three Kings games, logged only 8:49 of ice time during the October 13 loss to Vancouver. Speaking with reporters on October 14, Darryl Sutter said his current injury was “related” to the upper-body injury suffered in Colorado. Four days later, Greene said he was “coming along” but not yet fit to play.

“A few days ago I started to feel better and I’m just getting stronger now and I’m trying to get ready to be at 100-percent pretty soon here, hopefully,” said Greene, who noted he had “no clue” as to when he might re-enter the lineup.

Though he’s getting close, he’s unlikely to play against the Predators. During rushes at Friday’s practice, he was the odd-defenseman out, with all defensive pairings from the wins over San Jose, Carolina and Winnipeg remaining intact. That means Brayden McNabb is most likely to skate to the left of Drew Doughty, Jake Muzzin should partner with Alec Martinez, and Christian Ehrhoff would skate with Jamie McBain.

Los Angeles has won six in a row after opening the season with three consecutive losses.

“We’ve got a lot of guys who have been there for a while doing it, playing in big games,” Greene said. “It’s early in the season, but those are big games to dig yourself out of an 0-3 hole. Everybody did a really good job.”

Matt Greene, on his approach to practice and whether he has any restrictions:
I don’t. I’m just kind of cruising around and just making sure that I’m getting my legs back underneath me and getting stuff that’s in my position – going back, getting pucks, retrievals, making the first pass – and just working on my game so I’m ready to go when I am healthy.

Greene, on what he has seen from the winning streak:
I think the forecheck has just been really good. I think guys are getting back to making sure they get that first puck stopped, being physical and that really opens up everything. That really keys are game I think. We rely heavily on that. We play a lot of O-zone time, a lot of time with the puck and the guys have been doing a great job with that. The top lines all the way through to the fourth line have been doing a very good job. I think the D have been great just moving pucks and getting it into their hands. And then Quickie has been outstanding. When those things click, we’re a good hockey team.

Greene, on the Kings’ road performance thus far:
It’s big. It’s big wins and we needed them and the guys have been doing a good job. It’s fun to watch.