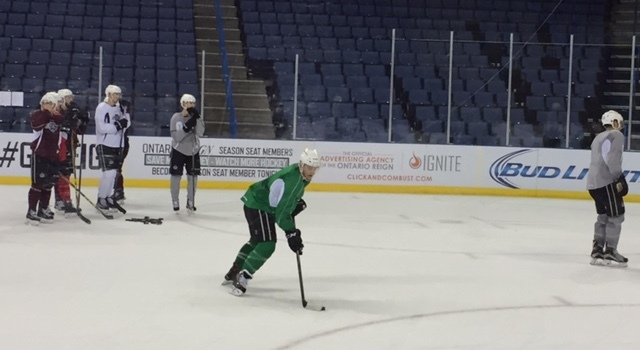 –It was the final “Development Day” at CBBA on Wednesday in the month of October. Each month the Kings’ player development staff comes to Ontario for back-to-back days where they give the players feedback and help them focus and improve on smaller parts of the game. Director of Player Development Nelson Emerson was in attendance with his group and spoke about what goes on. More details of development days, the benefits and Michael Mersch (the student) later today.

–Forward Joel Lowry (upper-body injury) is still practicing in a red no-contact jersey. The AHL rookie out of Cornell University has yet to play in a game for the Reign this season. “He’s coming around,” head coach Mike Stothers said after practice. “He’s seeing the doctor today with the hopes that he’ll be cleared for contact and he can resume full participation in our practices starting next week. That’s the hope today. I don’t know what the doctor’s going to say really, but he has been skating with us for the longest time, we just haven’t been able to get him involved in any bumping and stuff. So if that happens you’ll see him in the lineup sooner rather than later.” We’ll look to get another update on him at Thursday’s practice.

–Veteran winger Paul Bissonnette was off the ice as he continues to recover from a lower-body injury suffered in the team’s opening road swing. “We thought Biss was closer than it turns out,” Stothers said. “It’s a situation [where] we don’t want to rush it and have him have a setback. We’d rather it settle right down so we’re optimistic that he will be ready for this upcoming week as well. In a perfect world we’d be excited about having Lowry coming back and Biss coming back.” Bissonnette has one goal in three games this season but has not played during this recent homestand.