Mersch ahead of learning curve 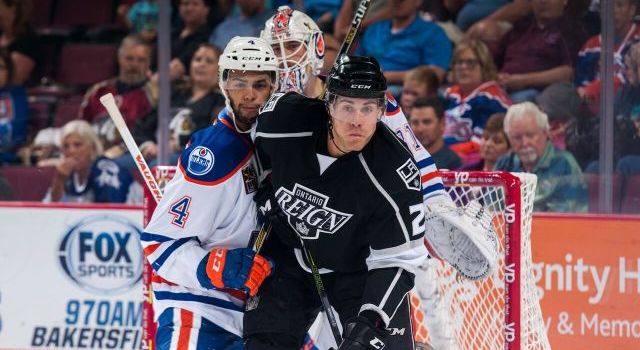 Meet Michael Mersch, the prospect, the winger. The student, really.

The AHL is a professional league, but it’s a development league. A place where Kings prospects hone their game before making the leap.

It’s no secret that many eyes inside and outside of the organization are on Mersch, an emerging talent who may serve as a mid-season call-up for the big club.

“The best thing I can say about Michael is he’s a real student,” said Nelson Emerson, the Kings’ Director of Player Development, who was in Ontario this week for a two-day takeover called Development Days. “He’s the kind of kid that you only have to tell him something once and then he goes out and he tries to work on it, or tries to correct it or tries to get better at it and you don’t really have to tell him again. So he’s a great student that way. He really wants to learn.”

Mersch, who had an encouraging preseason with the Kings, currently leads the Reign in important categories through five games this season (goals, 5; shots on goal, 26; plus-minus, +6). During Development Days, Mersch said a lot of his energy went specifically toward power skating, but also the mental side of the game.

“For me, I think it’s just being sharp in practice,” Mersch said Wednesday. “Think about what you’re going to do before you get on the ice, executing that stuff and being sharp and doing the drills right and staying focused. The more you’re focused the quicker practice is and the more you get out of it.”

Mersch added: “There’s a lot of things that go on in these practices so if you’re able to take one or two or three things out of it it’s beneficial.”

Emerson is already impressed with the way the second-year pro out of the University of Wisconsin has taken “ownership of his own game” and last Saturday Reign GM Rob Blake said Mersch has come down to Ontario and “set his mind on the bigger prize” – that meaning, of course, a spot with the Kings. That same night Reign head coach Mike Stothers was asked about Mersch looking NHL-ready and responded: “You better keep that a little more quiet now. We don’t want to lose him anytime soon.”

Mersch is making the steps to get there.

Last Friday during the team’s home opener Mersch’s individual effort off a wraparound where he buried his own rebound put Ontario on the board after they were trailing 3-0 to Bakersfield late in the second period. His team would rattle off three more goals to take the lead and go on to win, but his goal ignited the comeback trail. The next day against San Jose he blocked back-to-back shots to end a period, a play that drew the attention of fans, Stothers, Blake and the press alike.

“As a coach you’re not supposed to have favorites, but I love watching Michael Mersch play,” Stothers said last weekend.

Not to mention there are those watching his development, tracking to see how he will do after being a key member of last season’s Manchester Monarchs team that won the Calder Cup. That run featured Mersch finishing tied atop the playoff points leaderboard with 22 (13 goals, 9 assists) in the 18 games it took to win the AHL title.

If you’re grading Mersch thus far, you look no further than the voices of the organization who speak so highly of him. His AHL homework is seems simple to dissect: stay the course on the good stuff, tighten up a few things, and wait your turn. But while he is under the microscope there can be easier days, and tougher days.

“It’s a long season, right? Think about it this way: When you’re in school or when you’re reading a book there’s that moment where your mind maybe drifts off for a second and you’ve got to be like, all right, I’ve got to stay focused here,” Mersch said, snapping his fingers as wake-up call. “Maybe that day you’re closer to the board and what the coach is saying in explaining drills. That’s the best example I have for it but some days are easier than others days are more difficult. You take it day by day.

He’s even looking to learn from the media.

Stothers said while the development staff was in Ontario the team worked on fundamentals and “skills that sometimes get neglected or overlooked during the course of a busy season.”

There’s video sessions, meetings and personal chats, but on the ice there’s a lot of fine-tuning and Stothers is happy to have it. The Kings’ development staff will be at CBBA two times a week per month till the end of the season.

Stothers: “I think as athletes, sometimes the little things in the game are overlooked and it’s so helpful in the fact that you have all these guys that come out and you’ve got guys who can specialize in the defense, specialize with the forwards and the centers and work on their skating and whatnot. I think it’s just an extension of the coaching staff and when you’re part of a developmental league it’s not just stuff that you put the time in in the summer, it’s a year-round commitment. We like to feel that as an organization that we’re not missing anything. I think that’s the beauty of the Kings. They want to make sure that they’re doing everything possible to help these young guys become NHL players.”