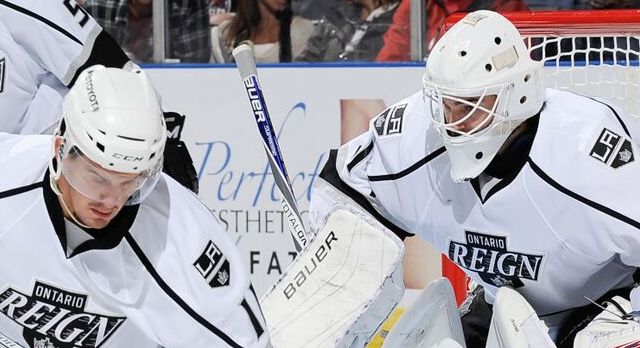 Reign general manager and Kings Hall of Fame defenseman Rob Blake spoke to the media after last weekend’s win over San Jose and gave his assessment on some of the team’s top prospects and the Ontario club thus far. Here’s some of the best from Blake and some additional notes/stats to supplement his opinions.

I thought he had a tremendous training camp. He does a lot things hard to find in the league, puck possession down low, the way he creates things in front of the net. You see it time and time again in the games you’re watching him. He’s very good. He’s come down and set his mind on the bigger prize here and he’s going to develop at this level here.

For the record: Mersch leads the Reign in goals (4), shots on goal (26) and plus-minus (+6) through five games this season.

I think you saw what he was capable of during the playoffs. Sometimes you rate these guys on how quick they adapt to the league. He’s coming out of college and you saw within 40 games last year he’s starting to understand the league and he’s starting to take over. Basically the message to him this year out of camp was continue that and things will open up for you.

For the record: Mersch finished tied for first in points with 22 in last season’s Calder Cup playoffs. He finished 2nd with 22 goals compared to other AHL rookies last year.

Blake, on Mersch’s growth in the leadership area:

The leadership part you pick up here quick after a year. They had a team that ended up going up winning the Calder Cup. He was a big part of that, he’ll be able to pick that leadership up. The pace he played in think was six preseason games – all of them of for us (the Kings). He’s understanding what that level is going to be like. He was around the NHL guys that whole training camp so he understands that. I think what he does now is he hones his game at this level. So when the opportunity comes it’s not just a given opportunity, he’s ready to make that step and doesn’t look back after that.

Blake, on how often he’s in contact with players/staff:

We talk quite a bit. We have a development staff that’s down here very often. It’s only been maybe a month since they’ve been up and running here but we’ve seen the benefits time and time again. We just saw it a couple days ago with Jamie McBain. One of our players came down with the flu in San Jose and we were able to get him in the afternoon. But as far as … Our guys are here a lot, we had a group here last night, another group here, our development guys are in next week so we’re in constant contact with these guys.

Blake, on what he likes with the Reign so far:

Always ready to compete. I think that’s one thing Coach Stothers put into the program from the start of last year and it carried them on through the playoffs and that. But you see it again here. I think the goaltending, I think Peter Budaj has been able to solidify that after with the injury to [Patrik] Bartosak and losing [JF] Berube on waivers. Our goaltender situation, stuff that’s not planned when you come into the season kind of takes a turn so I think that solidified itself. And having [defenseman Jeff] Schultz down here too, another veteran who understands the game. But what he does is his off-ice preparation and things help these young kids learn.

Blake, on veterans and what they provide at AHL level:

They won last year with those guys helping lead the way. The young guys they’re coming out of college they’re coming out of junior, they need help understanding that. When you can have guys who have played in the pros – we have Budaj and [goalie Ray] Emery and Schultz – you can add these guys in the mix and they’re also not just putting their time in they’re actually putting the work in and helping these young kids. So very, very important and I think we saw the rewards from it last year.

For the record: Budaj leads the AHL in wins (5) and shutouts (3). His .955 save percentage and .98 goals against average is also tops in the league for goalies playing more than two games so far. Emery has yet to get in the net, but that seems like the approach head coach Mike Stothers wants to keep. He says he plans to stick with Budaj until he has a reason to start someone else.

Another guy you’re counting on big things coming out of junior, ready to make that step for a pro. I think they surround him with some good players here and he gets to step right in and compete at that level. But I think that’s what Mike Stothers is real good about with these young guys is mixing them with some of the older guys so they fit into different lines here and they contribute.

For the record: Zykov is currently tied for the league lead for game winning goals with two.

Blake, on the language barrier for Erik Cernak and Zykov:

That’s all part of that learning curve. Not only are they trying to figure out the pro style game but understanding the language. Cernak a little more than Zykov, at least he was over [here], but he was playing in the Quebec League so now he’s trying to understand California language (laughs). It’s a little different. I think just the living habits, living on their own too, a lot of these guys have been with billet families or been with different situations, now they’re turning pro. So there’s that whole part of that game and that’s where I think those veterans guys I talked about really have command on this team.

For the record: Cernak, the 6-3 Slovakia native, was a 2nd-round pick by the Kings in the 2015 draft. He has yet to make his debut for the Reign and last week Stothers said he was in no rush to get him into the lineup, noting developing defensemen is a process.