On winning streaks; was the San Jose game a catalyst? 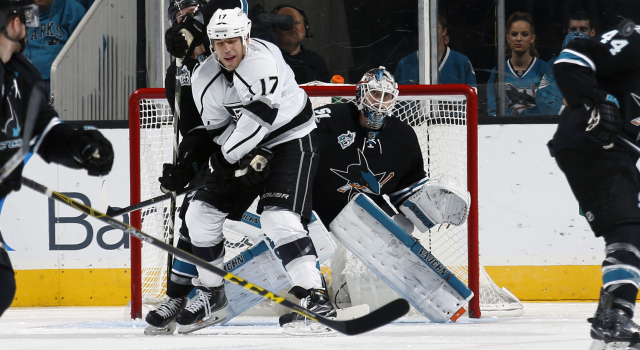 We’re about to leave for the rink shortly, and with the 7:00 start time tonight, I didn’t get a chance to attack one of the stories that I wanted to write today. So, quotes time!

I’ve spoken with several members of the organization about the team’s five-game winning streak, and while there’s one train of thought that the Kings recently have been lifted by Jonathan Quick – his save percentage has risen to .923 and the NHL recognized him with a Third Star of the week – and standout special teams, there’s also another, independent thought that the San Jose game was beneficial for the early season life of the team. There, the Kings went into hostile territory and avenged an ugly season opener by getting a terrific performance in net from Jhonas Enroth and opened up a 2-0 first period lead before emerging victorious in a 4-1 game. It got me thinking a little bit about an interesting topic: Because there are so many two and three-game winning streaks over the course of a season, is there something intangible that leads a club to win five, or six, or even eight or more games in a row? Looking at you, Montreal Canadiens…

I spoke with several players today about what the San Jose game meant, and what has to come together for teams to string together multiple wins, as this current Kings team has done. Of course, Los Angeles has a challenging set of circumstances once again this evening as they look to lengthen their streak against a very good Winnipeg team that has formed a strong identity when playing in front of its home crowd. The team will look to “just be ready, right off the start,” Tyler Toffoli said.

“We know what this building brings, the energy that they feed off of. We can’t let them get any momentum. We’ve got to be playing strong all night long, a full 60 minutes and like I said before, just play our game and keep things simple and shoot the puck and get there.”

Drew Doughty, on what has to happen to extend a modest streak into a longer one:
I think just continuing to do the right things. I think when you get on winning streaks maybe sometimes your tendency is to maybe get a little cute or try to do too much at times. We just have to continue using four lines, six D and getting in hard on the forecheck and scoring goals and keeping pucks out of our net, too.

Doughty, on what he has liked about the team’s game on the winning streak:
I think we’re just playing more confident. I think individually, I think everyone is playing with more confidence and as a team, that comes together, too. So when we’re playing confident as a team, we’re a very good team and we all know that. But it takes everyone every night. We can’t have some guys showing up one night and some taking it off. We need everyone to show up collectively and that’s how we’re going to win games.

Doughty, on whether it was an issue that players were “taking games off” last season:
I’m sure it was. We didn’t make the playoffs. So it obviously meant that everyone wasn’t showing up every night. I know that’s tough to do and tough to expect from a team every single night, but that’s what you need. This league is so tough now and teams are so good. You need to be able to play four lines and play six D and kind of roll through. Maybe we did lack that a little bit last year and that’s why we didn’t make the playoffs.

Toffoli, on how important the game in San Jose was to establish how the team is playing:
That was a huge game for us, not only just to win, to win in their rink but to beat them after the way they beat us the first game there of the year. I think it showed, not that we had any doubt ever, that we have a really good team and we know what we can do. We know what we can bring every night and that was a real big start for us.

Toffoli, on how his start to this season compares to his start last season:
To be honest, I think last year we were playing better at this time of the year. Me, Carts and Pears, we had great chemistry right off the start, even in the preseason we were playing great and I thought we were moving the puck better. I think this year we just got a couple good bounces and a couple shots. They’ve just been going in.

Toffoli, on whether he was at home with mono when Tanner Pearson broke his leg:
I want to say I was at the game, to be honest. My mono wasn’t that serious, to be honest. … I think I took a week-and-a-half off and I was skating. I’m pretty sure I was at the game and I saw him walk in and I didn’t know how serious it was. Obviously they took the X-rays. I remember him coming into the room and saying he’s just broken one of his ankles and [had broken] his other ankle before. He knew it was broken. So I’m pretty positive I was at the game.

Toffoli, on whether it’s gratifying for Pearson to score his first goal of the season:
For sure, he’s been talking about it and I wouldn’t be surprised if he gets hot playing with Kopi and Brownie. Obviously two great players, but Pears has been playing great this year. He’s been shooting the puck. He’s getting a ton of shots, moving his feet. For him to get that first one, I wouldn’t be surprised if he gets a couple more.

Jordan Nolan, on what has to happen to extend a winning streak to five or six games:
I don’t think we’re really too worried about a winning streak. I think we’re trying to look better every game. We still have a lot of stuff we can work on as a team in the way we’re executing our plays. I mean we’re just trying to get better every game is what we’re trying to do and if it comes with a win, then that always works out for us.

Nolan, on how important the win in San Jose was to the team:
Definitely, they’re one of the top teams in the league and we always have good battles against them. So any time we can show up against a team like that and shut down their top players and still show that we can play that gritty style, it’s definitely a confidence booster for us. I think it definitely got us going for this little streak we have.