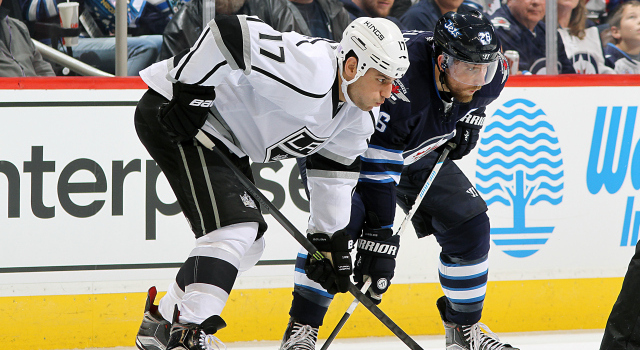 Milan Lucic, on what differences he has noticed in the Western Conference game:
I mean there are definitely some differences. The first couple of games, I think it has more to do with it being October than it is anything. I find that there are definitely less odd-man rushes, especially three-on-twos in the West than we got on the East. So that’s one of the main things. But at the end of the day, you’re just going out there and playing hockey. It’s a fast-paced game on both sides. Like I said, I’m just doing my best to adjust as quickly as I can. Obviously there is a difference. I’ve already felt it so far with the travel. I mean I know that this is the first mini road trip, but it’s definitely a lot more travel than what I’m used to. But like I said, it’s something that you have to adjust to and keep getting better, adjusting to it every day.

Lucic, on whether playing a sound positional game comes with confidence:
Yeah, I think so. I think mainly it’s a mindset. I always found, especially for myself, when you’re thinking about scoring and thinking about going on offense and cheating on the offense, that’s usually when you spend time in the D-zone. So when you’re coming underneath the puck and making strong plays in the D-zone and able to establish speed going the other way, that’s when things tend to go for you. Like I said, when you’re playing the right way and coming up the ice together and playing to your strengths, that’s when things go well for you and I think, especially as a line, we need to remember that and keep that going.

Tyler Toffoli, on what allowed the team to come back from a one-goal deficit:
I think there’s no panic. We just found a way to stay with our game – stay on the forecheck, keep shooting the puck – when you do that, good things are going to happen and obviously they did.

Toffoli, on the two-on-one rush that led to Milan Lucic’s goal:
I saw Looch got a really good jump and I was just reading off of him really. I don’t know who it was that pinched, whoever was playing left there, but he pinched in and Looch just kind of bypassed him and we had a two-on-one. I moved it over to Looch and he put it in.

Toffoli, on what is standing out defensively on the six-game win streak:
I think our penalty kill has been pretty solid. We’ve been building some momentum off of that and just feeding off of that. Our power play has been doing a pretty decent job too, scoring big goals for us and just carrying momentum throughout the game.

Toffoli, on whether he likes a game with few penalties and lots of back-and-forth:
Yeah, it was a hard game. I thought it was good for us. We worked hard and dug deep and scored late in the game. When we had to bear down and make those little plays, we were making them and came up with the win.