Kings-Jets: A clash of similar styles? 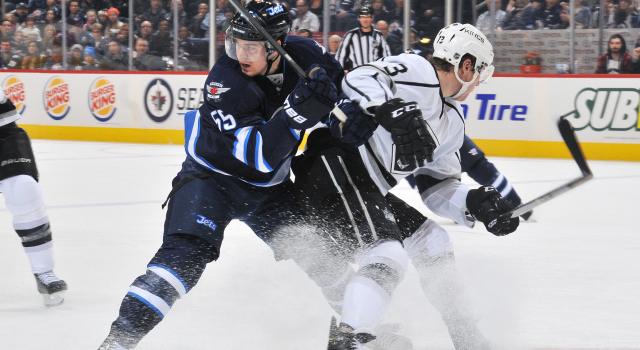 Teams that visit Staples Center and the MTS Centre would be wise to invest in ice packs. Both the Los Angeles Kings and the Winnipeg Jets are often seen as “heavier” NHL teams, for the lack of a better term, and are capable of employing physical, grinding styles that wear opponents down.

“I think we’re probably similar-type teams,” Darryl Sutter said before noting that both teams “have really good players up front” and “a top guy on the back end.”

Sutter also noted that the Jets have found a clear identity when playing in their home building, one that the Kings will have to contend with tonight when they take the ice in one of the loudest NHL arenas for the first of their two visits this season.

“Probably the early part of the game, they always come out really hard in this building,” Drew Doughty said. “They’ll be hitting us, trying to get pucks in deep and really run us down. But we’ve seen that before and we know what to expect. A lot of arenas on the road are like that. So we know what to do to get by that.”

The Jets are 2-1-1 in their home arena this season, and for a continued preview of tonight’s tilt, I also spoke with Jordan Nolan and Tyler Toffoli about what teams have to be aware of when battling against a team that shares many similarities.

Jordan Nolan, on whether Winnipeg is one of the more difficult teams to play against:
I think so. I think last year we came into this barn and they took it to us pretty good. So we’ll definitely try and return the favor tonight. We’re just trying to get better every night and we still have some work to do in our game. If that comes along with playing gritty and battling with these guys, it should be a fun game to watch.

Nolan, on how Winnipeg is different from the Kings in their heavy style:
They’ve got some heavy defensemen. Our D are kind of more skilled without Greener in the lineup, he’s a pretty heavy player for us. So I think that’s definitely the big difference between us. But I think we’re pretty similar in style. We’re both pretty quick teams and heavy on the forecheck and like to play that gritty style. So it should be a fun game to watch and it’s always a good battle between us.

Tyler Toffoli, on how Los Angeles’ and Winnipeg’s styles are different:
I think they have some younger guys in their lineup now. … I think they’re just a hard working team. They all play the same way. They all buy in and they’re a tough team to play. They have good goaltending. They have a great rink to play in, and that’s similar to us. We have a great rink, we have great goaltending. They have big D, we have big D and our forwards all buy in to what we want to do and how we want to play.

Toffoli, on whether he enjoys playing against a heavy team like Winnipeg:
Oh, it’s going to be fun. It’s always fun playing here. It’s a loud building, one of the loudest in the league for sure. They’ve got a great team. They’re off to a good start and we’ve got to be ready to go and keep things going the way we want to be playing.