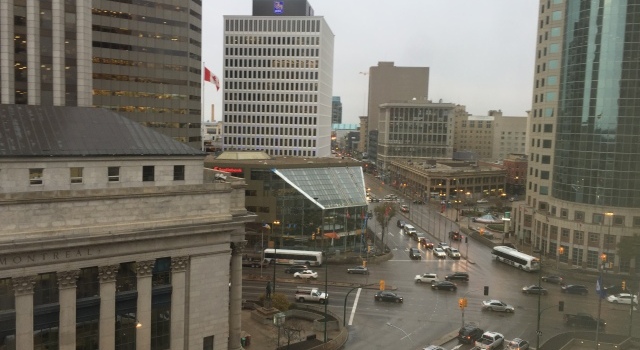 Instead of loading up the plane after Sunday night’s win in Edmonton, the Kings remained in Alberta for an extra night and were present to see the transfer of comfortable, mild temperatures to a rainy slog; given the Indian summer we’ve experienced in Southern California, the fall-like surroundings have been welcome. And after traveling east in the air for 90 minutes, there were again welcoming skies upon our arrival in Manitoba, which was to be followed by the rain we had raced out in front of. Fortunately that rain will stay rain – there were forecasts of a dreaded wintry mix today – and the temperatures will remain fall-like, which is all you can really ask for when visiting Winnipeg at this time of the year. The most pleasant in-season times to visit Winnipeg – or, Winterpeg, as the colloquialism goes – are the first or last months of the hockey season; stray too far from those borders, and you’ll end up knee deep in 10 inches of snow, as we did when visiting on March 6, 2014.

Good morning, Winnipeg posts are the best kind of posts because they contain Neil Young videos. This room may look out at Portage and Main, but I’m going in a different direction from Prairie Town. Don’t Let it Bring You Down, Kings fans.

I can make my own videos! Here’s our approach to YWG on a crisp, beautiful fall afternoon:

There’s a lot more to come from the MTS Centre, where the Kings are expected to hit the ice at 11:15 a.m. Coming soon: SUITE NIGHT DETAILS! There’s going to be a quick turnaround on this event, which will be Frank Robledo-free. Good morning, Insiders.