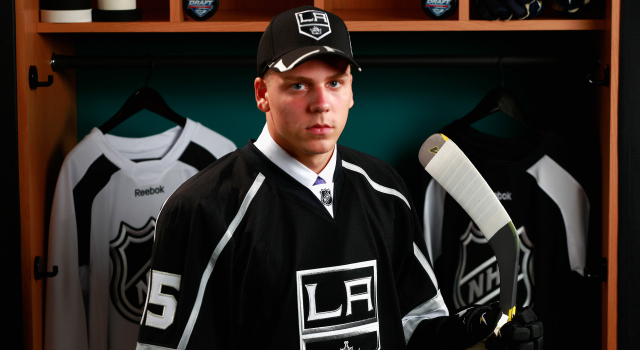 Erik Cernak will be reporting to the Erie Otters, as announced by the OHL club and confirmed by the Kings. This should put an end to a labyrinthine saga in which the Kings had “four or five” different options of where their 2015 second-round draft pick could play, according to Mark Yannetti at the draft, and had the end target for where one of their top defensive prospects would play change frequently.

Cernak, who previously played professionally in Slovakia’s Extraliga, had been assigned to the Otters out of training camp but did not report to the Pennsylvania-based club. Instead, he joined the Ontario Reign, traveled with the team to Winnipeg for the series against the Manitoba Moose two weekends ago (but did not play), and continued to serve as a healthy scratch during recent home games against Bakersfield and San Jose.

The process of getting Cernak to Erie, who had selected him in the CHL Import Draft, required educating Cernak and his family about the benefits of playing major junior hockey. The CHL – comprised of the Western Hockey League, the Ontario Hockey League and the Quebec Major Junior Hockey League – is seen as a top developmental league with a playing frequency similar to that of the AHL and NHL, and has many elite, top-tier prospects scattered throughout the 52 Canadian and eight American teams. (Last year, Connor McDavid played for Erie.) Because Cernak came to North America without a prime understanding of the structure and high level of play of major junior hockey – as would be understandable for someone without deep roots in the continent – the team had to convince him and his family that the OHL was not a step down from the professional game, and that the CHL is classified as a semi-pro league. Also, the ability for Cernak to join a North American major junior team and learn the culture, language and style of play was seen as a benefit in his development.

With eight defensemen expected to see minutes in Ontario, there just wasn’t room to guarantee that Cernak would get enough playing time to facilitate his development. I was also told by hockey operations that the team considered placing him in ECHL-Manchester, but that idea wasn’t explored earnestly or realistically. Cernak will have the benefit of playing for a top OHL team – Erie is 9-1-1 on the season and relies on top prospects such as Dylan Strome (selected third overall in 2015) and Travis Dermott (selected 34th overall in 2015), as well as Kings prospect Jake Marchment, who has logged a 67% success rate at the faceoff dot this season and has 12 points in 11 games. He’ll also have the benefit of playing for Slovakia at this year’s World Junior Championship, which will be played in Finland between December 26 and January 5.

We are off to Winterpeg. Just kidding. It's called Winnipeg, but it's very cold. See what I did there? Jokes are fun. You know what else is fun? Road trips with new friends. And it's our teams first trip of the season to Canada. Gods country. And what better time for all of you to meet Erik Černák aka Drago. Erik was born all the way in Košice, Slovakia. And does this guy pack a frame. He's 6'4 and weighs 230lbs. His birth certificate says he's 18 years old but when he showed up to training camp with his wife and 5 kids that's when all the players started becoming suspicious. Erik is still "junior eligible" but for fear of the other players, the CHL won't let him join the league. Regardless of age, Erik is no stranger to hard work. He would go to work with his father, a well respected logger in Central Europe, since the tender age of 12. While in remote logging locations his father would have him wrestle bears in the woods to toughen him up. While we all know this is legitimately insane, Erik explained to me this practice is very common where he's from. Contrary to what Erik is physically he's actually a softy on the inside. He and his wife, Shanikwa, bake the team pastries on our day off with his mothers Slovakian homemade recipes. He has no idea what or where Winnipeg is. I'm not even sure he knows where he is right now, but he doesn't care as long as he gets to play the game he loves. Not only is Erik a great player, he's an even better teammate. It's his first year playing pro and we are all extremely excited to have him. Fake birth certificate and all. #MeetTheReign