The View From Edmonton 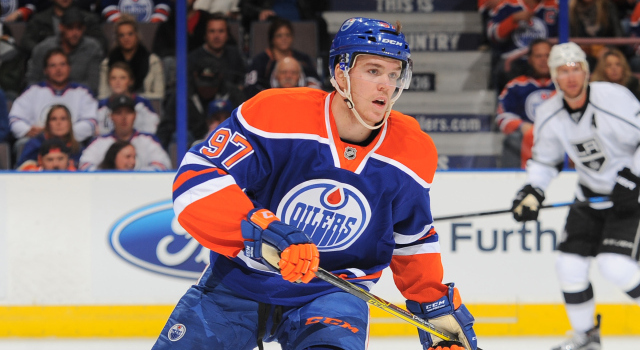 Jim Matheson: Oilers make a point Sunday, even as team fails to snag any in 3-2 loss to L.A. Kings

“We know the teenager would like to have shot the puck under the crossbar, far away from Quick’s mitt which is the size of a garbage can lid, but the rubber met the road on or about the goal-line.”

“The Oilers — outhit 39-24, outshot 34-28, and unable to regain the lead after Benoit Pouliot opened the scoring at 4:42 — were a video review away from at least taking the Kings to overtime.”

“The (3-5) Oilers, hoping to rebound after a 7-4 loss to the Washington Capitals, kind of did. Aside from a sluggish second period, they were step for step with a big bruising LA team for most of the night and almost took it to overtime.”

“When Jonathan Quick flopped the modern day extra large pizza-sized trapper on top of the puck as it was crossing the goal line with 5.2 seconds to play Sunday night against the Los Angeles Kings, it had no chance to count. Zero.”

“The Kings played a heavy brand of hockey, got some luck on the winning goal, and didn’t give the Oilers many chances to produce offense. It’s not as though the Oilers played poorly tonight, but they were outclassed by a very good hockey team.”

OilFanInYYC: The Oilers Deserved To Lose But Not Like This

“In the latter 13 minutes of the second period the Oilers were only able to muster 2 shot attempts. Those 13 minutes defined the rest of the game and eventually sealed the fate of the Oilers.”

“As shaky as that 2nd Period was for the Edmonton Oilers, fact is they hung around. It was a game at the end only because the Oilers bent but didn’t break, until Taylor Hall was able to slip a nifty deflection past the L.A. goaltender.”