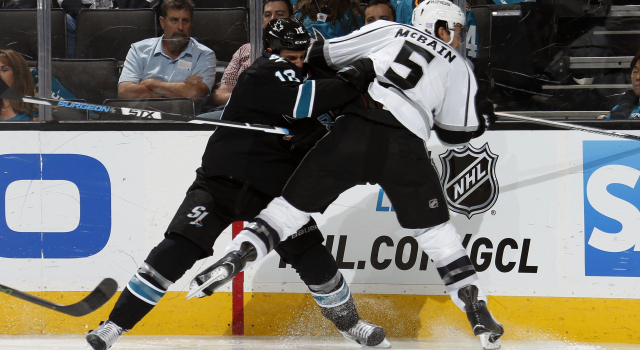 When Jamie McBain got the call last Thursday that he was to immediately join the team in San Jose for that night’s game against the Sharks, he was one stoplight away from Citizens Business Bank Arena after preparing for what he thought would be the Ontario Reign’s home opener the following night.

Instead, he turned around and retrieved his equipment before heading west to catch a flight out of LAX.

“It was a hectic day but getting the call is always a fun thing,” he said.

Because Kings defenseman Derek Forbort was ill and McBain would need to be thrust directly into action, the expediency to get him to the Bay Area was paramount. That meant taking the first flight to San Jose that he’d realistically be expected to make, and it happened to be a Southwest Airlines flight.

Fortunately, he was in the “A” boarding group.

“I was in the first row, ready to get right out of there,” he said.

Heading directly from the airport to the SAP Center, he joined the team and ended up logging 12:58 of ice time, primarily alongside former Buffalo Sabres teammate Christian Ehrhoff. The circumstances were a bit hurried, but his preparation wasn’t badly affected.

“It doesn’t matter what’s happening the day before or what’s gone on,” McBain said. “You’re mentally going to be ready to go and take the strides to make sure that your body is ready and whenever you’re called upon, go out there and get the job done.”

And so he returns to a blue line that is younger than previous incarnations – at 27, he’s the third-oldest defender – though not void of familiarity. He has played with all other Kings defensemen in his career, whether in Los Angeles, or in the case of Ehrhoff, Buffalo. (Or, in the case of Brayden McNabb, Los Angeles and Buffalo).

Ehrhoff has been his defensive partner, and through three games, they’ve been vying to build a comfort level. In the 36 minutes and three seconds of five-on-five ice time they’ve spent together, they’ve been on the ice for one goal: Anze Kopitar’s snipe over Cam Talbot’s shoulder Sunday night.

“I’ve liked our game overall, so far,” Ehrhoff said. “Like I said, we’re trying to improve from shift to shift and we can talk a little more on the ice, help ourselves out in some situations better. But other than that, it’s been pretty good.” McBain has been held scoreless over an average of 13:07 of ice time through his first three games, while Ehrhoff has two assists in eight games while averaging 17:20 of ice time.

If you look at Los Angeles’ defensive corps, each defender is capable of pushing the pace of play, and both McBain’s and Ehrhoff’s play tilt towards creating offense and originating an attack.

“I think we’re a really good puck moving pair,” McBain said. “I think we’re both guys that can control the puck and control the play. I think that’s one of our strengths and it’s getting great body position, getting good breakouts, good transition game, getting pucks up to the forwards and being a factor in the offensive zone – moving pucks along the blue line, getting shots to the net and taking care of our end. Just making sure we’re effective whenever we’re called upon.”

The move shifted Ehrhoff back to the left side after he had played the first five games of the season as a right defenseman.

“It’s a little bit of an adjustment, but for me personally I don’t care if I have to play left or right,” Ehrhoff said. “I play wherever I’m needed and I’ve played the last few years on the left side. So it’s a little bit of an adjustment you’ve got to make game to game, making sure you stay on your side and don’t drift towards the other side you’ve been the last few games. Other than that, it’s not much of a difference.”

McBain, on when on Thursday he learned he’d be recalled:
I found out after the practice in Ontario. I was actually already heading out of the rink and got a call on my way home and had to turn back and go get my equipment again. So it was all very last minute stuff. I flew right into San Jose, directly right to the rink and played. [Reporter: How far did you get?] Not far, I was at the first stop light. Fortunately I wasn’t too far.

McBain, on whether it’s challenging to jump into the lineup with an unfamiliar partner:
It is, but it isn’t. Obviously you want to establish that chemistry, but they’re such good players up here at this level that it’s pretty easy to just go out there and play within the system and you’re going to be effective.

McBain, on whether the front office gave him indications of his role for this year:
They didn’t really give me any indication. Obviously I signed a two-way contract, so there’s always that indication that I can be sent down at any time and that was the case to start the year. Now I’m back up. I take every day day-by-day and do my job.

Christian Ehrhoff, on the frequency in which he played with McBain in Buffalo:
I don’t think we played together that much. We weren’t paired up that much together in Buffalo, but obviously I know him as a player. He’s a good skating, puck moving defenseman, solid in his own end and has a good shot. So I know what to expect from him and we just try to get better reading off of each other from shift to shift.