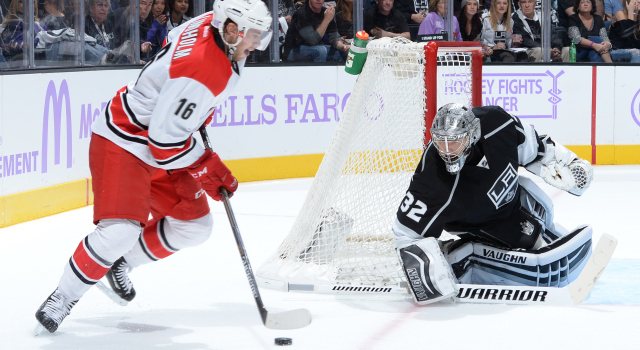 The Kings have allowed five goals over their five-game winning streak, and by virtue of a week in which he posted a 2-0-0 record, a 1.00 goals-against average and a .971 save percentage while shutting out the Carolina Hurricanes and making an incredible, highlight-worthy (if controversial) save on Connor McDavid in a win over Edmonton on Sunday, goaltender Jonathan Quick was named the league’s third star earlier today. Washington’s Evgeny Kuznetsov and Montreal’s Andrei Markov were named the first and second stars of the week.

If you also consider Jhonas Enroth’s 39-save performance in San Jose on Thursday, Los Angeles goaltenders combined to stop 105 of the 108 shots they faced in wins over the Sharks, Hurricanes and Oilers.

Quick’s honor represents the first time this season a King has been named as one of the league’s three stars of the week. Quick was the last King to be honored as a league star, having received first star honors by stopping 94-of-98 shots in wins over Tampa Bay, Colorado and San Jose (in Santa Clara) for action between February 16-22, 2015. Tyler Toffoli had been named the league’s second star the prior week.

FIRST STAR – EVGENY KUZNETSOV, C, WASHINGTON CAPITALS
Kuznetsov paced the NHL with six assists and nine points – and also shared the League lead with a +5 rating – as the Capitals (6-1-0, 12 points) won all three of their games. He began the week with three assists, matching a career high, in a 6-2 victory over the Calgary Flames Oct. 20. Kuznetsov then picked up the primary helper on Alex Ovechkin’s tiebreaking goal with 4:55 remaining in regulation in a 3-2 triumph over the Vancouver Canucks Oct. 22. He capped his performance with 3-2—5 and a +4 rating, establishing single-game highs in goals, points and plus/minus, in a 7-4 win over the Edmonton Oilers Oct. 23. In doing so, Kuznetsov became the first Capitals player to record a five-point game since Dec. 10, 2013 vs. TBL (Nicklas Backstrom: 1-4—5). The 23-year-old Chelyabinsk, Russia, native has 17-40—57 in 104 career NHL outings, including 3-8—11 in seven appearances this season.

SECOND STAR – ANDREI MARKOV, D, MONTREAL CANADIENS
Markov shared first among defensemen with 1-5—6 as the Canadiens (9-0-0, 18 points) won all three of their contests to extend the franchise’s best start in its 98-year NHL history. After being held off the scoresheet in a 3-0 victory over the St. Louis Blues Oct. 20, Markov registered 1-4—5 and a +4 rating, setting single-game highs in assists and points and equaling a personal best in plus/minus, in a 7-2 win over the Buffalo Sabres Oct. 23. In doing so, he became the second defenseman in Canadiens history to post a five-point game on the road (also Sheldon Souray: 1-5—6 on Jan. 10, 2004 at PIT). Markov closed the week with one helper in a 5-3 triumph over the Toronto Maple Leafs Oct. 24. The 36-year-old Voskresensk, Russia, native – who has spent his entire career with the Canadiens – ranks third in franchise history among defensemen with 109-393—502 in 855 NHL games, including 1-9—10 in nine outings this season.