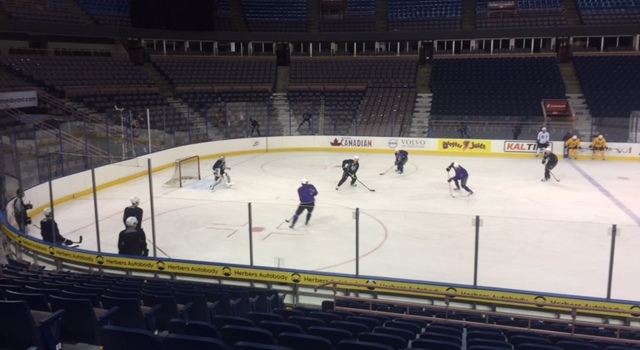 Good afternoon from a bus bound for Edmonton International Airport. The Kings took the Rexall Place ice at high noon, right before rain began to fall in the area. There were no changes to forward lines:

-The media bus arrived too late to gauge whether defensive pairs changed in line rushes, but given that the team has won five in a row, don’t bet on it. On our commute to the rink, we were treated to a view of the Rogers Place construction site.

Both the Oilers and the WHL’s Oil Kings will move into their new digs next season.

-Speaking of the Oil Kings, they’re playing host to the Kootenay Ice tonight, and when we arrived for practice, the Ice were observing the skate from behind the net that Connor McDavid very nearly scored in last night. Brayden McNabb is a Kootenay alum – he captained the Ice to a Memorial Cup berth in 2011 – and smiled when noting the familiar colors around the rink when he left the ice.

-It was a typical practice involving rush and flow drills and some three-on-one rushes. I didn’t notice any work on the power play, which is humming along with a 3-for-6 performance through two road games this season and for the third straight game potted the game-winning goal.

-I spoke with Darryl Sutter briefly after practice to gain some perspective for a feature story I’m working on that focuses on the club’s development staff, so there won’t be any Sutter quotes today (but look out for that story on LAKings.com on Thursday). I did, however, chat with Jamie McBain and Christian Ehrhoff about their defensive partnership, and the quick turnaround McBain experienced when leaving Ontario after the Reign’s practice Thursday morning as he learned that he’d be called up for that night’s game in San Jose. More to come on a rainy Monday in Western Canada… 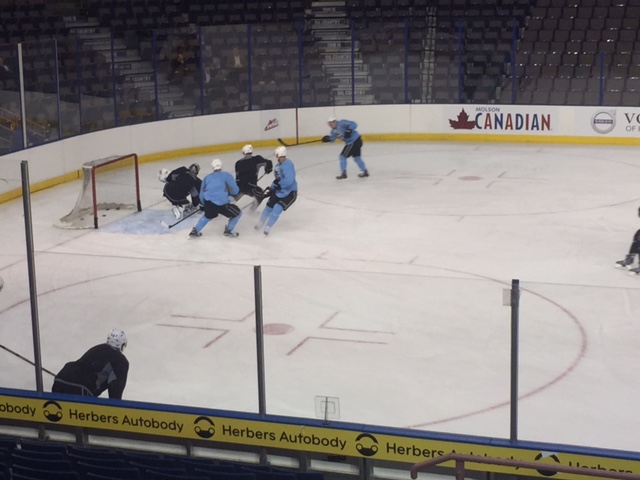