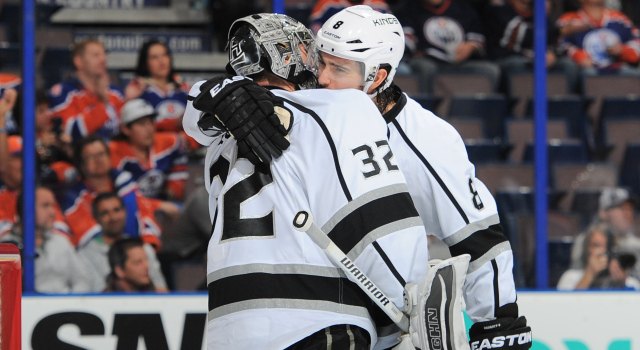 On the NHL confirming the on-ice call that Jonathan Quick made a save:
It wasn’t a goal. The league has more angles than anybody that’s standing here, including myself. You know what? You’ve got to ask me about it. It’s no goal on the ice, it was no goal by the league, so it’s no goal. It’s not that hard to figure out.

On the importance of Tanner Pearson scoring:
Absolutely. There are guys who haven’t scored a goal for us yet, or one. We switched those left wingers up, and he scored a big goal. It’s a big goal, and he’s in the slot. It’s like a dirty five-on-five goal. That’s what it is.

On Pearson:
He’s been getting a lot of shots. I think he’s struggled a little bit in the battle, the traffic part of the game, and I think that’s been from being off so long and coming off a major injury, and we wanted to get a little bit more size and more traffic from that line. Coming into this game, Kopi had scored two goals, and one was four-on-four and one’s three-on-three, so really the line, other than Gabby’s one goal, that line had not given us much in erms of production, so we put Tanner there.

On what he’s liked about the recent power play success:
Well, we’ve scored goals in how many games in a row there? Pretty important goals I would say, so that’s what’s important.